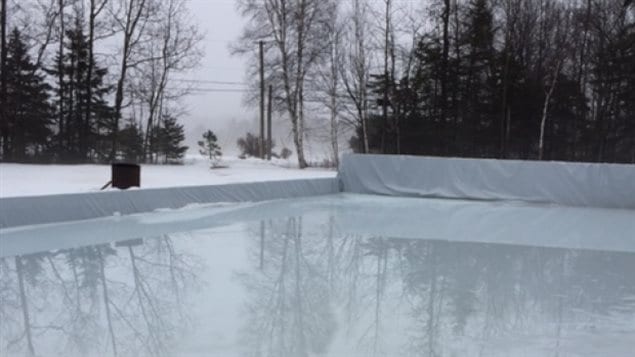 Backyard rinks across Canada, like this one in Stratford, Prince Edward Island, are melting in the erratic tempertures. Freeze and thaw cycles ranging from minus 20 to 15 degrees celsuis emptied many locations.
Photo Credit: CBC / Sherry MacInnis

Backyard skating: from rinks to sinks this winter

Backyard skating is a Canadian winter tradition, but this year the mild temperatures have rendered it a memory in many places. These are the findings of some innovative citizen-science.

RINK WATCH, is the initiative of a group of geography professors at Wilfred Laurier University in Waterloo, Ontario. This international project is helping to track the effect of global warming, and this winter is proving to be a major challenge.

“When we first launched it, it was one of these little experiments that we did off the sides of our desks to see if there was any interest”, Professor Rober McLeman explained. The website and the interactive map became a hit, initially in Montreal, and word spread. The venture was so successful the team needed students to help out with the data. “Now students will make it part of their ongoing research projects to participate in Rink Watch.”

Generations of children, and many adults, have passed the hours playing hockey and figure skating around a backyard rink. It is now part of Canadian lore how former hockey star, Wayne Gretzky, spent his childhood on the rink his father created every winter in Brantford, Ontario. Number 99 says he developed his talent “right in my own backyard”.

“It’s such an important thing for our kids and our families to have this outdoor activity.”

It is so much a part of the Canadian landscape that our currency, the blue five-dollar bill, featured an image of the backyard rink from 2002 to 2013. It is the place where children gather and imaginations are engaged. From emulating hockey heroes to attempting figure skating feats, to blooming romances, everything is possible!

This winter however, a combination of El Nino and global warming, according to Professor McLeman, has left the rink makers very frustrated. The temperatures have been so varied in Atlantic Canada that there are no rinks reporting from Newfoundland.

McLeman says there are fewer people overall reporting this year. “After two or three of these freeze-thaw cycles people are throwing in the towel.”  Two or three nights of temperatures consistenly below minus 10 celsius are needed for the ice to solidify, and then daily tempertaures can’t exceed minus 5 celsius. This coming week they are forcasting 14 or 15 degrees in eastern Canada.

“As soon as the thermometre starts creeping up above that the quality of the rink deteriorates and people just stop skating.” McLemon says we still got winter this year in the form of freezing rain, snow and slush, “but we didn’t get any good cross-country skiing or outdoor skating and so these are the things that really make living in Canada a fun thing to do in the winter-time.”  Now as another season comes to an end there’s not much to do but compile the data and hope for next winter.