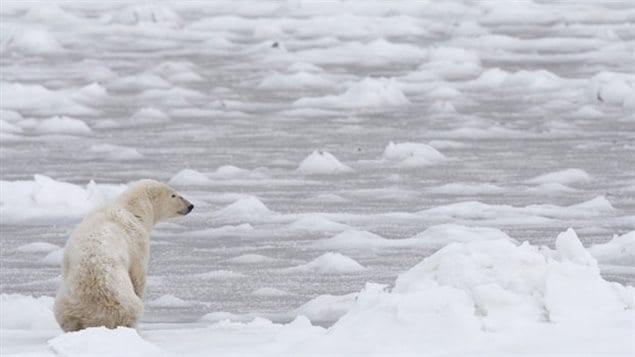 A polar bear looks towards Hudson Bay near Churchill, Manitoba in November 2007. Experts say climate change is slowing the formation of winter ice on Hudson Bay and it is melting earlier, reducing the bears hunting season. Measurements show polar bears are getting smaller and lighter on average, than they were in the 1980’s.
Photo Credit: Jonathan Hayward/The Canadian Press

Protecting people and polar bears from each other

It is an age old problem but one that has been getting worse with global warming.

Each year the polar bears of Hudson Bay get into trouble and threaten people in the small communities along the shore, as they roam the shore area waiting for ice to form.

This has led too often to a need to destroy the bears when they threaten the villages.

Since 2010, the World Wildlife Fund-Canada has been involved in a successful programme to try to prevent bear/human encounters and so reduce the need to kill the bears.

Paul Crowley is the Vice-president of Arctic Conservation for the World Wildlife Fund-Canada.

The bears roam the shore area along Hudson Bay as they wait for ice to form, but as they are hungry they are attracted to villages and the smell of food.

With global warming the ice is taking longer to form and begins to melt sooner meaning the bears are spending more time on land where food is limited.

David Miller, WWF-Canada president and CEO says, “With steadily decreasing sea ice coverage due to climate change, polar bears in the Western Hudson Bay population are spending more time on shore in summer and away from their primary food source: seals caught from the sea ice. While waiting for the ice to freeze, some scavenge food along the coast, and are attracted to communities. WWF is pleased to see that our ongoing partnership with the Hamlet of Arviat is continuing to pay off for both community members and the polar bears. We are now working to share these successes with other northern communities to expand the program.”

This year (September — December, 2015) the community of Arviat experienced 190 encounters with polar bears with two DLP kills of bears threatening human life. There have been 20 attacks on humans in recent years.

The bears are attracted by the smell of meat left for the Inuit dog teams, or left out for the families themselves, and of course the odours from town dumps.

Bears roaming into or near villages can be very dangerous with Up until 2010 when the WWF-Canada began its programme to chase bears out, an average of ten bears a year were being killed under Defence of Life and Property (DLP) regulations.  Since then the average is down to one a year.

The WWF has been funding patrols to detect the bears near villages and chase them away before they pose a risk.

Persistent bears are trapped using seal meat, and then physically transported  far away from the community.

The WWF-Canada is now expanding the successful Arviat model to new communities in the Canadian Arctic, and sharing experiences with northern communities in other parts of the polar bear’s range by hosting a front-line operators’ workshop on Hudson Bay in March of 2016;