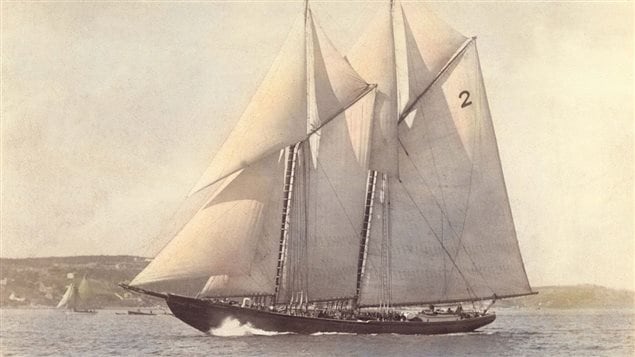 circa- 1921 The beautiful lines of Bluenose, the most successful and faster schooner in the America’s in the 20th century.
Photo Credit: W.R. MacAskill/Library and Archives Canada/PA-030803

The Bluenose schooner is without doubt Canada’s most iconic sailing ship.

These beautiful sailing ships were the fast workhorses of Canada’s maritime and Atlantic provinces, especially Nova Scotia, from the 19th century to their peak in the early 20th.

The east coast fishing vessels, American and Canadian, would fish off the Grand Banks and then rush back to port as the first vessels in got the highest prices for their catch.  This of course led to competitions, and soon an organized race between American and Canadian ships began.    For 17 years, the Bluenose beat all those the Americans put up against her, including special built schooners.

The ship was later enshrined on Canada’s ten cent coin.

But wooden ships don’t last, and the original Bluenose was tired and outdated as motorized ships became the norm. Sold and eventually wrecked in a storm, she passed into Canadian legend.

Then a rich Nova Scotia brewer had an exact copy built in the 1960’s  to promote the company’s “Schooner” beer product, but the ship, Bluenose II was eventually donated to the province as a provincial “ambassador”.

The Bluenose II, eventually too had to be rebuilt, and in 2009, the third rebuild became what is virtually an entirely new ship, the new Bluenose II was launched with great fanfare in 2012.

During the rebuild and ever since, the ship has been plagued by controversy and allegations of government mismanagement.  The original estimate was a little over $ 14 million. However actual costs are now over $25 million and potentially still rising.

I told you so…

One of the major issues was to have the ship certified by an American registry which declared that a massive steel rudder was required for registry approval.

Interestingly, Nova Scotia shipbuilders at the time said this was all wrong. Still the work went ahead at enormous cost, later additional hydraulics had to be added at even more cost, and still it didn’t work properly.

Now, the government said it will have to replace the steel rudder at the end of the sailing  season in 2016 with a wooden or composite rudder…..at additional cost.

Nova Scotia shipbuilder Len Boudreau said he met with officials last year and gave them drawings on how to correct the rudder problem, with a wood or composite rudder and provided drawings. The government then spent $30,000 with an American firm, which basically came up with the same solution.

Boudreau who is an experienced wooden schooner builder and sailore of almost four decades is quoted in the Halifax Chronicle saying  it was a “kick in the teeth” to have the government accept his advice for free then pay money for an American company to tell them “exactly what I told them.”

The existing rudder system has failed on several occasions over the past couple of years, and Boudreau says there’s a “90 percent” chance it will fail again this year.

He says he could have a working rudder built in three to four weeks at a cost of under $75,000.

He also expressed concerns about other aspects of the build, such as using steel spikes which will rust, and several other issues he says are conflicting with the build.

Quoted by the CBC he said “If the government of the day had gone to Lunenburg and talked to some of the great shipwrights there, and in the great shipyards around this province — we have a long history of shipbuilding — and said ‘look, here we go boys, we’ve got a job to do, we’ve got to build a wooden schooner,’ they would have gotten a really good schooner

Another quote in the Herald about the government overseeing of the project, “They’re just a bunch of bureaucrats running around in a circle. None of this needed to happen.”