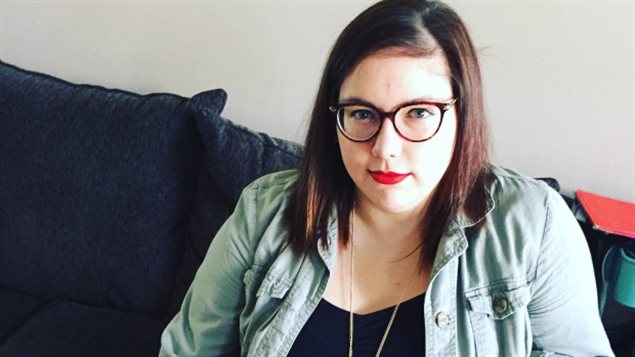 Connie Levitsky-fired for announcing her new sales job at a plus-sized women’s clothing store as *Conquering the world, one well-dressed fat lady at a time.’
Photo Credit: Connie Levitsky

Edmonton Alberta university student Connie Levitsky was happy to be hired by the retail clothing chain Addition Elle a week ago.  It’s a chain that sells fashionable clothing to “plus-sized” women.

The major clothing retailer Reitmans Inc. is the major player in the plus-sized market in Canada, creating subsidiaries like Pennington’s which carries plus-sized lines, and Addition Elle.

Levitsky says this  subsidiary “has been known for creating fashions that embrace every type of style, and encourage women of all sizes to express themselves.” She adds, “ I was so excited to be a part of that.

A few days after being hired, Levitsky posted on her Facebook page about her new sales job writing, “Conquering the world, one well-dressed fat lady at a time”.

The young woman who describes herself as “fat” in her Facebook page said that some time ago she decided that she is no longer afraid or ashamed of the word, refusing to let it define her any more.

The district manager of the company saw the posting, called the store who contacted Levitsky who then removed the post immediately. She thought the matter was over.

Arriving at work later, she was told she was fired as the company does not use the word fat which it considers a “swear word”,  but instead uses euphemisms like “shapely” or “curvy”.

Levitsky however says if you look at the customers, shapely and curvy may define some but certainly not all.

Once the story became widely known, the company later said it took her words out of context, and then posting on their Facebook page, “We believe that anyone should use whatever words they are comfortable with when describing themselves and whatever makes them feel empowered. We recognize that letting her go was a mistake and have apologized to our employee for any hurt this may have caused her.”

The company says it want to hire her back, but that seems unlikely.

The young woman says,   “I feel it would be a disservice to the women I was trying to empower if I continue to work for a company that has said … that they still don’t condone the use of this word.”

Levitsky adds, I really hope this is really the start of something positive, for all of us — no matter how we identify”.