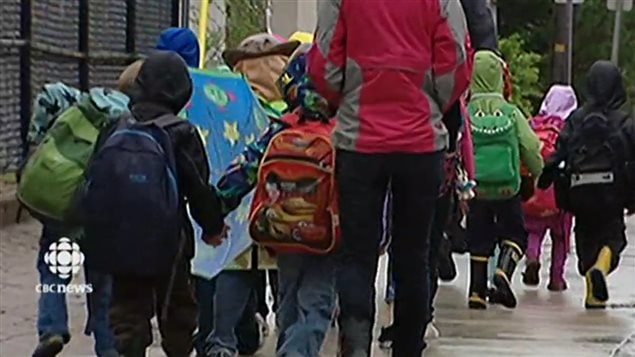 Walking to school can have mental, physical and social benefits, say experts, but fewer Canadian children do it.
Photo Credit: CBC

More children are being driven to school and fewer are walking or cycling, according to a study of children 11 to 13 years of age in Toronto and the nearby city of Hamilton.

“(It was) not a terribly surprising finding but somewhat disappointing, particularly given that the last time I looked at these data in 2006, I kind of thought, or  I’d hoped at least, that maybe we wouldn’t see a further decline in the use of active transportation for trips to and from school,” says Ron Buliung, a University of Toronto geography professor and lead author of the study.

Parents often cite convenience as a reason for driving their children to school. They often incorporate it into their own commute to work and heavily-scheduled activities. They also cite safety concerns. “Parents will often talk about ‘stranger danger.’ Children are more likely to discuss bullying issues or concerns about older kids,” says Buliung.

Parents are also worried their children may be struck by a vehicle as they walk to school, but he says, paradoxically, they put other children at risk when they opt to drive their own children.

The report comes at a time when the World Health Organization issued a call for people to become more active to avoid obesity and the increased risk of developing diabetes. Canadian children have become more sedentary and spend unprecedented amounts of time seated, watching television or using electronic devices.

Children who walk or bike to school have been found to have better concentration, according to a study from Denmark, observes Buliung. And he says there are other benefits too. “The walk to school provides an opportunity to acquire and practice geographic skills like spatial awareness, orientation, way-finding. And…children simply may have an opportunity to play and socialize with their friends, and isn’t that a wonderful thing.”

Steps are being taken across Canada to try to get more children to walk or bike to school. Active & Safe Routes to School is a community-based initiative that provides tools to encourage active transportation. School authorities or communities can use models that are provided and adopt a model charter committing them to promote active school travel.