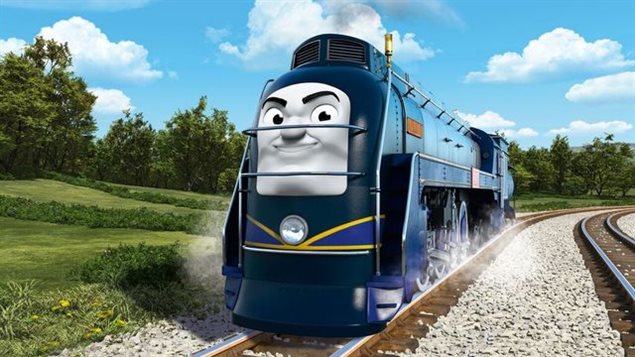 The new character in the upcoming Thomas and Friends movie. A Canadian designed and built engine, numbered to the Canadian National Railway, with the Royal Blue livery of the 1939 cross-Canada Royal Tour CNR trains, but portrayed as "American".
Photo Credit: Thomas and Friends- the Great Race

There is no doubt the British children’s TV show, Thomas and Friends, is a huge international hit.

Soon the tv show will be hitting the big screen in a movie, with an expanded group of international “characters”  including a Canadian engine.

First created in a series of children’s books by Rev. Wilbert Awdry and son Christopher.  Thomas appeared in the second of the “Railway Series” books in 1946 and became the most popular character.

In 1979, the series was brought to television and quickly became a hit.

All based relatively closely on actual locomotive models, Thomas has a number of friends in the series.

Now a movie is being made called “The Great Race” which brings a number of international engines into play, including for example from Australia, India, China and elsewhere including Canada.

The  Canadian character “Vinnie” is clearly based on a late 30’s early 40’s locomotive designated as a U-4-a Northern 4-8-4. These were built by the Montreal Locomotive Works after extensive streamlining tests to keep the smoke out of the cab and reduce wind resistance. The Northern 4-8-4 model was designated a Confederation model in Canada in its use by the Canadian National Railway (CNR). The Thomas fan site misidentifies the new character as being a U-4-b, and from the Grand Trunk Western Railway. (*since corrected to U4-a)

The GTWR was  a company based in Canada but operated both in eastern Canada and some northern US states. However 6407 was in fact a U-4-b with a couple of distinctly different visual cues, and it would appear from photos that the GTW only had U-4-b models (6405 through 6410), while the CNR employed the U-4-a. (6400 through 6404)

Engine 6400 is the only one preserved, and is located at the National Museum of Science and Industry in Ottawa, Ontario.

In either case, GTW or CNR livery, the nose would be black, the boiler grey, and the stripe a kind of lime green with yellow edges, with the cab and tender also green.

“Racing Vinnie” appears to have adopted the paint scheme used for the locomotives on the Royal visit to Canada in 1939.

The train is named “Vinnie” which for Canadians sounds more like a name for someone from New York City.

Vinnie’s character is described as having “a tough demeanour and competitive drive that often gets the better of him. While this makes it hard for the others to get along with him, they still lend him a hand in a time of need.”. He is also apparently a bully and a cheat.

This most certainly doesn’t sound very Canadian at all, eh?

Perhaps that is why the filmmakers seem to have a decided on a more “North American” character, as they do in the YouTube trailer. rather  than one specifically American or Canadian Although the Sodor fan site lists Vinnie as American..sadly, and in the film he has a very distinctly American  New York./New Jersey accent

It’s a cool looking engine for sure, but if they wanted to use a Canadian engine, and in the colours of the Royal tour across Canada, why make it American?

The story of the Royal Tour