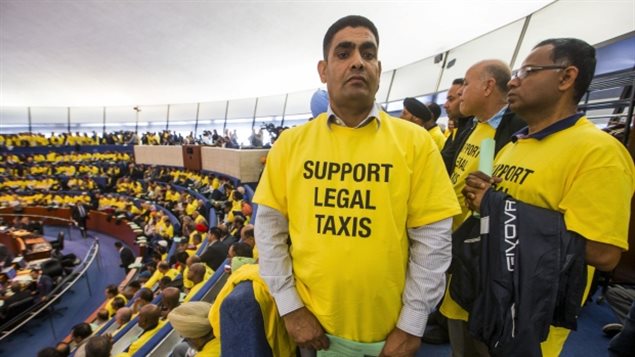 Uber is facing some changes in Toronto in an attempt to level the playing field between the so-called “ride-sharing” service and the city’s taxis. But many opponents are not satisfied that it does enough to benefit taxi drivers.

Uber arrived in the Greater Toronto Area in 2012. Since then opposition and protests, some of them violent, have grown, in tandem with Uber customers. In 2014, Toronto Mayor John Tory said Uber was here to stay, and unlike the neighbouring city of Mississauga, which requested Uber halt operations until the regulations had been worked out, Uber continued to operate in Toronto. Councillors voted against seeking an injunction to stop Uber’s operations in February 2016.

Last week, Toronto’s 44-member city council released more than 100 recommendations at city hall. After all the work and consultation these proposed changes still amount to different sets of rules for Uber and for taxis.  But it is an attempt to ease what the report calls “the burden on taxis.”

These may be breaks for taxi drivers but are they an improvement for Toronto’s citizens? Or is what some have described as a race to the bottom?

Jim Karygiannis, a member of parliament for 25 years, and now city councillor for the same area of Toronto, is outraged. He proudly wears the title of anti-Uber crusader.

“We are allowing Uber to get away with murder; no licensing, no marking, no plates — nothing,” he said, adding that the recommendations don’t go far enough to level the playing field with taxis,”  he said In an interview with CBC last Thursday.

Why are you favouring Uber?

Some of the proposed new regulations for Uber include yearly inspections for its vehicles, background checks for Uber drivers and the creation of “vehicle-for-hire” licenses.

Karygiannis says, “Taxi drivers are very upset that we’re creating differentset of rules for Uber. We’re letting Uber monitor itself… their drivers have to pay only $10 (Cdn) to be licensed and the cab driver has to pay $200 bucks (Cdn).

Karygiannis has some support of city council. “Instead of levelling the playing field, we’ve dropped the floor and we’ve completely caved to Uber, and I’m shocked by it, frankly,” said Councillor Janet Davis, at city hall following the release of the report on April 7th, 2016.

She says Uber does not protect drivers or customers. “We know they surge price and we know they gouge drivers. I don’t understand why we wouldn’t put regulations on the worst aspects of this new kind of system,” Davis said.

“It says to me that Uber’s arrogance and complete disregard for city regulations to date has been successful,” she added.

Jim Karygiannis provides the appalling example of the surge pricing following the terrorist attack at the Lindt chocolate café in Sydney,   , Australia in December 2014. And many consumers closer to home got a different kind of Uber experience on New Year’s Eve.

Returning from a party in Montreal in the early hours of January 1st this year, two young women paid $630 (Cdn) for a trip that would have cost $83 (Cdn) in a regular cab.

Jim Karygiannis is a member of Toronto’s Licensing and Standards committee, and they begin debate on the recommendations this Thursday, April 14th, 2016.

Meanwhile, a majority of Canadians believe Uber should be subject to the same regulations as taxis, a poll in mid-February found.

Conducted by the Angus Reid Institute, the survey, published Friday February 12th  2016, indicated 63 per cent of Canadians feel the government should regulate Uber the same way it regulates taxis, while just 37 per cent said that Uber should be allowed to continue operating without those regulations.