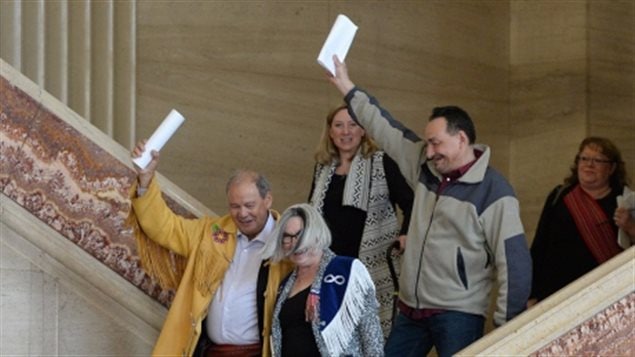 The Metis in Canada are generally considered to be a group descended from a mix of aboriginal prarie First Nation peoples and the Scottish, French, and other Caucasian fur traders of centuries past.

In 1867 when Canada was formed and the new federal jurisdictions first laid out in the British North America Act, the Canadian federal government assumed responsibility for “Indians”, including a financial responsibility while the Metis were simply not considered.

Since then, and with the creation of the “Indian Act” in 1876 which consolidated many federal regulations concerned with Canada’s aboriginal populations, the Metis were again left out as they were still considered “non-Indian” and as such not federal responsibility.

In 1999  prominent Metis leader Harry Daniels first began a legal challenge to have the Metis included as an aboriginal or “Indian” group in the eyes of the law.

Over the course of years there have been rulings for and against as the case made it through the legal system until it reached the country’s highest and final court, the Supreme Court of Canada (SCC) .

Chris Andersen (PhD) is a professor and interim Dean of the Faculty of Native Studies at the University of Alberta.

For decades whenever the Metis sought rights, such as land claims for example, the challenge was to get someone to accept responsibility to negotiate. Both the federal and various provincial governments all said it was the other’s responsibility.

Today’s unanimous 9-0 rulling by the SCC says that the Metis and off-reserve Indians are included in the 1867 definition of the word “Indian” and as such are clearly and constitutionally, a federal responsibility.

This ruling will affect more than 600,000 Metis and other aboriginals who live “off-reserve”.

While there are reports the ruling could have massive financial implications for Canadians and the government as Métis and non-status Indians become eligible for the kinds of support for land, housing, post-secondary education and other benefits equal to those of current “status Indians” (ie those covered under the Indian Act), the ruling doesn’t actually go that far.

As professor Andersen says, what is clear is that the federal government now knows that Metis fall under their jurisdiction, and for the Metis it is now clear with whom they will negotiate in regard to a number of concerns.

Both professor Andersen, and professor Larry Chartrand (LLM) of the University of Ottawa agree that the ruling does not automatically mean that the government will be financially responsible for what could amount to billions of dollars in support for Metis.

They say what it actually means is that many other legal actions may now be begun between the two parties, (Metis/federal government) to determine such things as rights, benefits, land claims, and even who qualifies as “metis”. Professor Andersen notes that other groups of mixed blood, not necessarily the traditional and politically active Metis of the western prairies are also included in the SCC decision

What it also means however is that it now sets our a clearer first step for what likely will be the beginning of a long process of further legal actions, both individually and collectively for Metis and non-status “Indians” (First Nations) in this country.