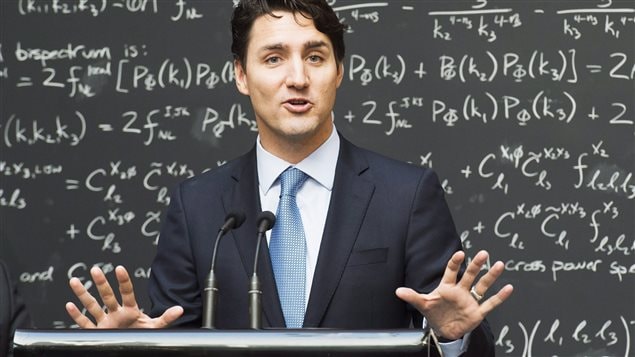 PM at the Perimeter Institute

The Prime Minister announced $50 million (Cdn) in funding over the next five years, for ongoing research into theoretical physics.

But he also impressed the crowd and som reporters, when he took an off-the-cuff comment and ran with it, explaining his take on quantum computing. In a thirty-second response he clarified;

Mike Laziridis, founder of Research in Motion, the developer of BlackBerry, established the Perimeter Institute to further the development of quantum computing technologies

Two hundred high school students, most of them young women, filled the upper levels of the lobby of the insitute today. They were attending as part of a program aimed at “inspiring future women in science,” according to Bardish Chagger, the minister of small business, and Member of Parliament for Waterloo.

“It’s a chance for these women to meet and speak to successful women scientists, to discuss challenges, to find mentoring, which we all know is so important,” Chagger told CBC News.

Prime Minister Trudeau also addressed the concerns of the institute, and the many people working in the high tech hub of Kitchener-Waterloo, wanting better transportation links to the Greater Toronto Area, approximately 100 kilometres away.