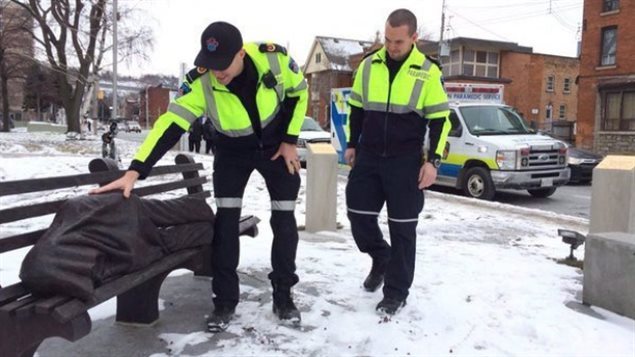 Paramedics approach a figure on a bench in a photo from the Hamilton Paramedics Twitter page. The statue in Hamilton Ontario got a lot of attention from paramedics this winter whic resulted in calls about a homeless person sleeping on a bench. The realistic looking blanket covered figure and bench are in fact made of bronze. The sculpture by Ontario artist Tim Schmalz is called *homeless Jesus*
Photo Credit: Twitter-Hamilton Paramedics/Canadian Press

Even as a very young man, Timothy Schmalz had religion in his life. However a change came about early his artistic career and he became much more inspired by religion.

Although by no means limited to religious works, he feels that creating them brings a special meaning to his life and he in turn to the work he produces. He says producing the work is like a form of prayer for him.

Recently, one of his works in particular has become extremely popular, and perhaps a little controversial among religious people.

It is both a reflection of our modern times and the message of Jesus.  It is called “homeless Jesus”.

Tim says working in bronze means the work will last forever, even when placed outside, and means the artist has to take great care in creating the work.

Now homeless Jesus statues are being placed in cities around the world. including the Papal Charities building in the Vatican where it was blessed by the Pope. However in Westminster in London, the council has voted against it.  A group in Westminster   has begun a petition to have the council change its mind about the placement of a “homeless Jesus” monument.

Other pieces in the same series,  include “When I was Naked” which has just been approved to be placed at St Peter in Chains in Rome.

The artist, based in St Jacobs, near Kitchener-Waterloo in southwestern Ontario, says works like homeless Jesus and When I was Hungry, and When I was Naked, along with memorials to fallen soldiers, and so many others of his works, large and small, give people a chance to reflect upon some of the social issues we face, and the more important aspects of life.