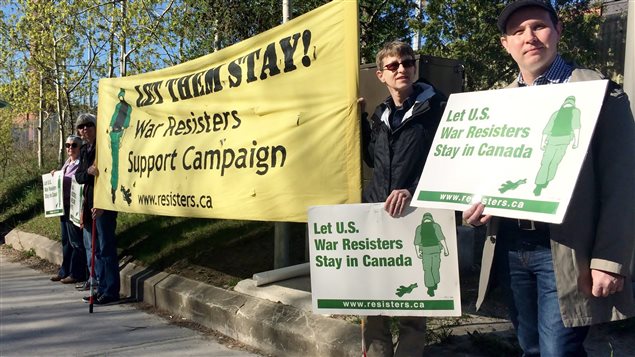 U.S. conscientious objectors got no commitment from Prime Minister Justin on their request to be allowed to stay in Canada today, reports Canadian Press. A group of war resisters and supporters turned out to press the issue outside an event in Toronto attended by Trudeau.

Quiet protest presses for a decision

The War Resisters Support Campaign held up signs and a banner on behalf of U.S. citizens who fled to Canada to avoid fighting in the U.S. government’s war with Iraq. Trudeau said his government is actively looking into the issue of whether to let them stay in Canada.

When he was campaigning for office in 2015, Trudeau criticized the Conservative government of the day for lacking compassion for American resisters. Now, the Liberal immigration minister says no decision has been made about them.

When Trudeau’s father, Pierre, was prime minister he welcomed a wave of U.S. citizens who fled to Canada to avoid fighting in the Vietnam War. It’s estimated up to 40,000 crossed the border 1960s.