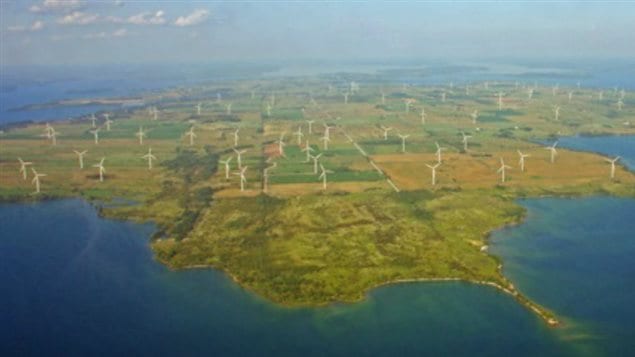 Aerial view of some of the 86 TransAlta wind turbines on Wolfe Island. Critics, including Ontario Senator Bob Runciman who says the turbines are located on bird flight paths and are killing high numbers of migratory birds and bats.
Photo Credit: Motorola ptpcomm.com-pdf-transalta_case_study.pdf

The claims are under segments of the North American Free Trade Agreement and stem from a decision in 2011 to place a moratorium on wind turbines placed in the Great Lakes.

Windstream Energy  of the U.S. filed claim saying the Ontario decision “wrongfully frustrated  its ability to obtain benefits of a 2010 contract with the Ontario Power Authority”.  The claim says the decision violates several articles under the NAFTA agreement under the Chapter 11 section regarding investor protection.

This stems from a plan to place at least 100 more wind turbines in the St Lawrence off Wolfe Island, near Kingston.

Originally filed in 2012, the case is now being heard in Toronto by a three member panel of investment treaty law experts from Finland, Spain and the United States.

Ontario-based Trillium Power Wind Corporation is also suing in regard to its plan to place turbines near Windstream’s site and in connection with the same temporary ban, now in its fifth year. It originally claimed $2.5 billion in losses, but that claim was mostly dismissed although one part was allowed to continue with one allegation, “malfeasance in public office”.

In creating the moratorium, Ontario said it needed more time to study the environmental impact of the turbines.

However documents obtained by the American company seem to indicate that Ontario wanted to place a five kilometer exclusion zone along the shoreline for aesthetic reasons and was seeking environmental justification.

Ontario meanwhile says Windstream is inflating its claim for damages and that NAFTA doesn’t protect investors from “normal risks”.

According to a study by the left-leaning think tank the Canadian Centre for Policy Alternatives, Canada is the most sued country under free trade “investor-state dispute settlement” (ISDS) clauses.

As of last year, 35 claims have been filed against Canada, under NAFTA which covers Canada the US and Mexico.  Canada has lost six cases for a total of $175 million. Mexico lost five cases against it for a total of $205 milllion, while the United States has never lost a case against it.

An earlier, similar lawsuit filed by US investor T Boone Pickens and his company Mesa Power, was rejected.