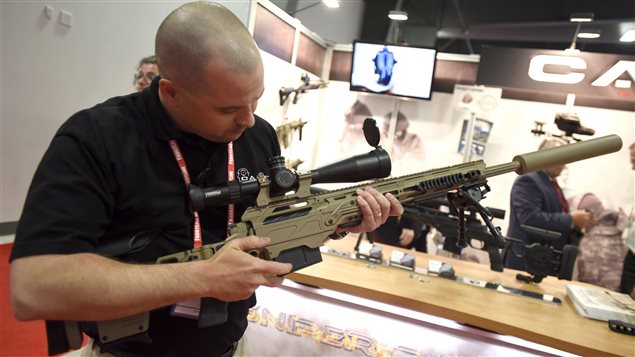 Patrice Picard shows off a CADEX sniper rifle at the Canadian Association of Defence and Security Industries’ CANSEC trade show in Ottawa on Wednesday, May 27, 2015.
Photo Credit: PC / Justin Tang

A remotely operated machine gun swivelling on its base with robotic grace, its electronic eye searching for targets, greeted you at the entrance to the trade show at Ottawa’s EY Centre.

A giant convention floor filled with booths featuring guns, ammunition, armoured vehicles and drones, replica airplanes and flight simulators: this is what a modern-day arms bazaar looks like.

This is CANSEC, Canada’s largest defence and security industry trade show, organized by the Canadian Association of Defence and Security  industries (CADSI). It brings together small and big arms manufacturers.

The entrance is by invitation only. To make sure the unwanted guests do not disrupt the show, beefy security officers guard every entrance to the building.

Few Canadians realize that Canada even has much of a defence industry to begin with. Unlike our neighbours to the south or Russia, where the mighty defence industry is a point of national pride, Canadian defence manufacturers toil in relative obscurity.

Yet, it’s an industry that contributed $6.7 billion to Canadian economy in 2014 and accounted for 63,000 jobs, according to a recent report released by the CADSI, in partnership with Science, Innovation and Economic Development Canada and Statistics Canada.

“It is the most detailed and comprehensive study of the Canadian defence sector ever conducted and it confirms that Canada’s defence industry is high wage, export intensive, technology rich and pan-Canadian,” said CADSI president Christyn Cianfarani.

These are well-paying manufacturing jobs.

“Companies that make up the Canadian defence industrial base—most of which are present here at CANSEC—and the types of jobs they offer, are what Canada needs and what governments should value in today’s global economy,” said Cianfarani.

The industry generated $10 billion in revenue in 2014, said Philippe Richer, director of research and analysis for aerospace and marine at Industry Canada.

But with these lucrative contracts come ethical dilemmas.

While most of Canada’s defence production goes to the U.S. and the EU, a growing part is destined to third countries, some of whom have very poor human rights records, to say the least.

The problem is the list of these importers of Canadian-made weaponry is a closely-guarded secret for now. Richer admitted that several companies that were contacted for a mandatory survey to prepare the report refused to identify their customers and list the countries where they export to. Richer said he will lobby the government to force manufacturers to answer all the survey questions for the next report, but for now, the Canadian public remains in the dark.

The case of Saudi Arabia, which has signed the largest defence contract in Canadian history worth $15 billion for state of the art light armoured vehicles (LAV 6.0 produced by General Dynamics Land Systems Canada based in London, Ontario, is one of rare instances that Canada’s defence industry sales grabbed public attention.

While the deal was signed by the previous Conservative government, Liberal Prime Minister Justin Trudeau seem to be hell-bent on honouring the contract, despite facing growing pressure to justify the shipment of weapons to the oil-rich desert kingdom.

Under federal export control rules, the government must make sure that “arms sales are carefully reviewed and human rights considerations are seriously taken into account.” And critics of the deal say it’s not clear how Foreign Minister Stephane Dion could sign the export license given Saudi Arabia’s abysmal human rights record.

Speaking to reporters at CANSEC, Cianfarani defended the deal.

“We don’t take positions on the judicial positions of other countries,” she said. “As industry, our job is to follow the regulations.”

The sale of LAVs to Saudi Arabia is also one of the clearest illustrations of moral, ethical and political dilemmas facing the government as it promotes the industry.

On the one side of the scale that the government must weigh are the economic and political benefits of the deal. It will bring in $15 billion over 14 years and support thousands of well-paying jobs not only in London but also in other provinces. Politically it is likely to increase Canada’s influence with the key Middle Eastern power and Canada’s ally in the fight with ISIS in Syria and Iraq.

On the other side of the scale are Saudi Arabia’s human rights record, its alleged serious violations of international humanitarian law – some would go as far as to call them war crimes – in its campaign against the Iran-backed Houthi rebels in Yemen, its support of radical Islamists groups many of whom espouse views not that different from those of ISIS or al-Qaeda.

It seems, at least for now, the government has decided to choose jobs and political influence over human rights concerns.