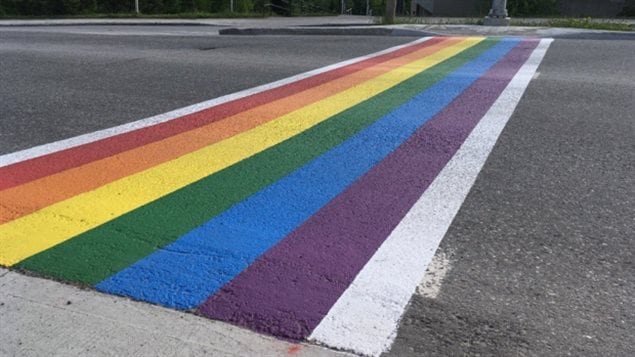 The first of two crosswalks has been painted rainbow colours in the small town of Corner Brook in the province of Newfoundland and Labrador.
Photo Credit: Brian McHugh/CBC

No one was surprised when the avant-garde city of Vancouver painted some crosswalks rainbow colours in support of the LGBTQ community in 2013, and now the small eastern town of Corner Brook has joined other cities doing the same.

Mayor Charles Pender said the idea is to promote diversity and inclusion.

“Sometimes we say the words, but I think it’s important to take the action as well, and demonstrate …that we’re committed to an open and diverse community,” Pender told CBC Radio.

The two crosswalks, he said, are council’s way of showing it believes in the dignity and basic rights of all, reports local radio station VOCM.