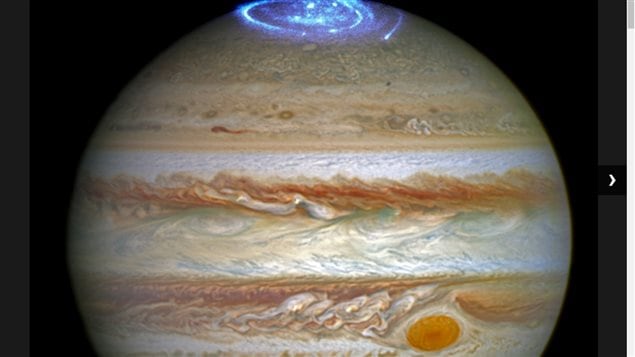 Juno took nearly five years to get to Jupiter while the Hubble Space Telescope has been observing and measuring the planet's polar auroras. This image, released on June 30, shows an atmospheric swirl caused by the solar wind.
Photo Credit: NASA/ESA

Jupiter and Juno: opportunity for the Manitoba Museum

Scott Young was watching that moment on NASA TV, and like many space enthusiasts around the world on Monday July 4th, he was thrilled with the success of the mission.

Launched on August 5th, 2011, Juno will orbit the planet for 20 months collecting data on the planetary core, map the magnetic field, and measure the amount of water and ammonia in the atmosphere.

“It’s kind of amazing to think that we can build something that can fly, three-quarters of a billion kilometres out into space and get exactly where it needs to be at exactly the right time to go into orbit around Jupiter and now we’re just waiting for the pay-off of all the great images and science that’s going to come back over the next couple of years,” he says.

Scott Young is the manager of Science Communication and Visitor Experiences at the Manitoba Science Museum. A former president of the Royal Astronomical Society of Canada, he says this latest development will change things at the museum.

“People really are excited about new discoveries and new images and the latest information. So we’ll be presenting a lot of this information as it comes down in our planetarium. We can basically have the images down as soon as the scientists get them and put them into our show. So we’ll be following Jupiter in detail over the coming months.”

He explained that this will take about fifty days. That’s the time it will take for the first orbit to be complete allowing NASA to test out the equipment, but by sometime in August the images and data should be coming in.

Along with all the technology, the spacecraft carries three 1.5-inch Lego likeness of Galileo Galilei, the scientist whose life straddled the sixteenth and seventeenth centuries. He first discovered the moons of Jupiter. The Roman god Jupiter, and his wife, Juno. Young says this is part of NASA’s steps to humanize the mission and increase interest on the part of young people.

Young says the team at Manitoba’s museum and planetarium make an effort to “show people the process of science and to get them involved in it wherever possible.” He says “it’s not some person working away in a lab all by themselves and having a Eurika moment, It’s a collaboration of world-wide scientists all working together to do these big things and involving the public in some of the process of discovery.”

Young says an event like this may be the moment someone decides on their future. “It’s inspiring for people who, you know, maybe never considered science as a career before, are now thinking “hey that was really exciting! I wanna’ this”

That was his experience when his parents, who he says knew a little about astronomy, allowed him to stay home from school for the total solar eclipse on February 26th, 1979. During the phase when it was safe to look, he says they drew back the blinds.

“I saw this amazing scene, that just completely blew my mind, the sun blocked out by the moon surrounded by this unnatural kind of glow, and right then I thought, OK the universe is amazing, I need to learn more about this, so that moment… that’s when I became an astronomer at nine years old.”

The end of the road for Juno

Young is looking forward to the possible discovery of new moons and finding out what’s at the heart of Jupiter, Is there a rocky core or is it clouds all the way through, are some of the questions he, and many others eager to answer.

And then, after 20 months and 37 orbits, Juno will expire. Young explains, that NASA, being mindful of the possibility of life, has planned for the destruction of the spacecraft.

“They don’t want to just leave it orbiting around there forever, because Jupiter has a bunch of moons that go around it, and it’s possible that some of them may harbour some kind of life, so we don’t want to contaminate anything there, so basically they’re going to take the Juno space probe and crash it into the clouds of Jupiter where it will completely burn up.”

In the meantime, however, it is hoped there will be answers and inspiration for many people.