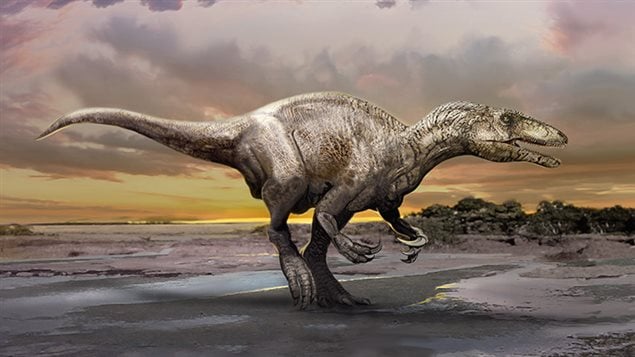 Artist concept of the new raptor species with its huge claws on the forearms
Photo Credit: Jan Sovak- U Alberta

One of the world’s leading vertebrate paleontologists, Canadian Philp Currie, has co-discovered another important dinosaur fossil.

The University of Alberta professor and Canada Research Chair in Paleobiology was working in Argentina with that country’s Rodolfo Coria from the Consejo Nacional de Investigaciones Científicas y Técnicas.

“This is a super-cool specimen from a very enigmatic family of big dinosaurs,” said Currie in a University of Alberta news release, adding,

“Because we have most of the skeleton in a single entity, it really helps consolidate their relationships to other animals”.

What they found was a fairly complete skeleton of a ‘theropad’  in Sierra Barrosa, near the town of Plaza Huincul.

The new species has been named Murusraptor barrosaensis after the area where it was found.

Currie said the location on a cliff face made excavation difficult, but the payoff was worth it. In a University of Alberta press release he said, “It was very evident that it was a beautifully preserved specimen of pure white in red rock. The hips were really interesting because they are pneumatic, clearly air-filled, not the kind of thing you expect to see in a big theropod.”

Currie estimates the animal was about eight metres long, but had not reached adulthood and was still growing. Initially they they thought the to be the “big can-opener” foot claw of dromaeosaur or raptor, turned out instead to be big hand claws.

A New Megaraptoran Dinosaur (Dinosauria, Theropoda, Megaraptoridae) from the Late Cretaceous of Patagonia” was published July 20 in the open-access journal PLOS ONE