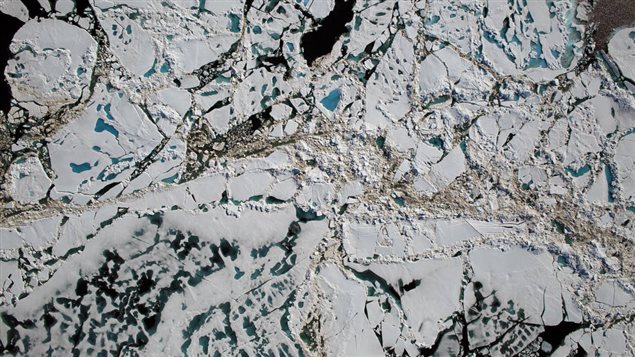 Chunks of sea ice, melt ponds and open water are all seen in this image captured at an altitude of 1,500 feet by the NASA’s Digital Mapping System instrument during an Operation IceBridge flight over the Chukchi Sea on Saturday, July 16, 2016.
Photo Credit: (NASA/Goddard/Operation IceBridge)

The first six months of 2016 were the planet’s warmest since meteorologists started keeping records in the late 19th century, while the Arctic sea ice shrank to its lowest extent since consistent satellite records began in the late 1970s, according to NASA scientists.

The six-month period from January to June saw average temperatures of 1.3 degrees Celsius (2.4 degrees Fahrenheit) warmer than in the late nineteenth century, according to scientists at NASA’s Goddard Institute for Space Studies (GISS) in New York.

Arctic sea ice also shrank to its lowest extent each month except March, which recorded the second smallest extent for that month, according to satellite data analyses by scientists at NASA’s Goddard Space Flight Center, in Greenbelt, Maryland.

“It has been a record year so far for global temperatures, but the record high temperatures in the Arctic over the past six months have been even more extreme,” said Walt Meier, a sea ice scientist at NASA Goddard.

“This warmth as well as unusual weather patterns have led to the record low sea ice extents so far this year.”

(click to listen the full interview with Walt Meier)

The area covered by Artic sea ice has contracted by 40 per cent compared to the early 1980s.

Scientists are seeing the ice loss trend accelerating, particularly in September, when the Arctic reaches its ice extent seasonal minimum, he said.

“It’s melting more rapidly, it’s melting earlier in the summer time, so there is more time to melt,” Meier said. “And so as we progress along, as things continue to warm, temperatures continue to rise over the years, the model projections all suggest that we will reach a point of essentially no ice.”

He said there might be some ice that sticks along the coastline in the Canadian Arctic archipelago but by and large the Arctic Ocean will be a blue ocean at least for part of the summer in August and September.

“When that’s going to happen is still an open question, there is still a lot of uncertainty there, the model projections tend to be more in the order of 2070 but they’ve been kind of moving sooner, towards 2050,” Meier said. “And the observations are showing a trend that is even steeper than that.”

We could reach potentially reach an ice free Arctic Ocean in the summer months in 15-20 years, he said.

There is already some evidence that a warming Arctic is also likely to have effects outside of the world’s polar regions, Meier said.

“The reason is because climate systems are interconnected, what happens in the Arctic doesn’t stay in the Arctic,” Meier said. “As you warm the Arctic up, you’re changing the balance between the cold Arctic and the warmer mid-latitude regions.”

This could result in extreme weather that remains longer over certain areas, whether longer droughts in some areas to longer rain seasons in the others, he said.

The global temperature increases and the corresponding Arctic sea ice retreat – two key climate indicators – are continuing their decades-long trends of change irrespective of seasonal phenomena such as the ongoing El Niño event.

“While the El Niño event in the tropical Pacific this winter gave a boost to global temperatures from October onwards, it is the underlying trend which is producing these record numbers,” GISS Director Gavin Schmidt said.

Previous El Niño events drove temperatures to what were then record levels in the late 1990s. But in 2016, even as the El Niño effects taper off, global temperatures have risen well beyond those of 18 years ago because of the overall warming that has taken place in that time.

NASA tracks temperature and sea ice changes through a network of 19 Earth-observing space missions, as well as dispatching scientific expeditions to observe and record the changes on the ground.