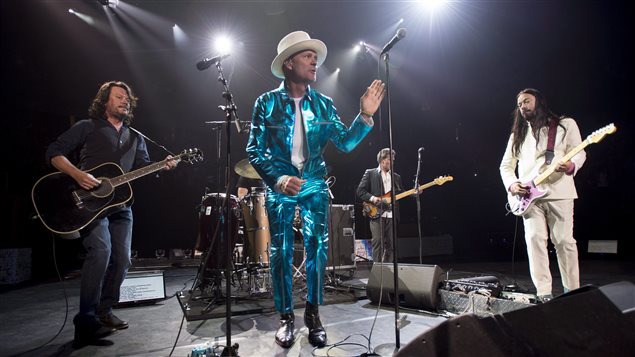 Tragically Hip frontman, Gord Downie, centre, leads the band through the concert in Vancouver on July, 24, 2016. Always a flamboyant showman, Downie is wearing that style on his sleeve in a collection of brightly coloured metallic leather suits during the band's Man Machine Poem Tour, which began in Victoria on Friday July 19, 2016.
Photo Credit: CP / Jonathan Hayward

The Tragically Hip came together as a band in 1984. They toured the country east to west and north so often, they became known as “Canada’s band.” So many of their fans met them in the bars of their towns and cities and stayed with them over the decades as the audiences grew to 20,000 a show.

“Growing up in Canada… we don’t hear reflections of our own culture in pop culture that often.”

“The Hip” on tour is an event. But this one is different, Unlike the rock n’roll farewell tour, where the bands regroup ten years later to tour again, the announcement in May, that lead singer and songwriter Gord Downie, was diagnosed with a terminal form of brain cancer, caused a frenzy of ticket sales. People are undertaking pilgrimages to see the band that provided the soundtrack to the lives of a couple of generations of Canadians now.

When controversy erupted over the ticket sales, with so many ending up in the hands of scalpers, and sold to the highest bidder, the CBC, Canada’s public broadcaster stepped in. The final details are being arranged to broadcast the band’s last show of the “Man Machine Poem tour” in their hometown of Kingston, Ontario, on August 20th.

Stephen Dame, is the author of a book on the band and the keeper of the website, “hipmuseum.com” which he describes as dedicated to “The Myth and Mystery of the Tragically Hip”.

He first began to pay attention to the band on the radio with songs that spoke of “Prime Ministers not Presidents”, he said, “I heard songs that referenced the St. Lawrence River instead of the Mississippi, and so as a kid growing up in Canada you are struck by that, we don’t hear reflections of our own culture in pop culture that often.”

Dame, a self-described history buff. appreciates that Downie tells the stories of Canadian people, places and happenings. He cites the song, ‘Lake Fever’ that refers to a cholera outbreak in the early 1800’s when Toronto was the ‘Town of York’.

“They are not only of us, they are about us”

With 14 Juno Awards they are indeed Canada’s band; even Canada Post issued a stamp in their honour, but their appeal goes beyond us. They’re loved in Austin, Texas and cities in Britain, and in several countries in Europe. But it is in Canada, with courage and dignity, the Tragically Hip are bidding adieu to the fans that have accompanied them on the journey so far.

Gord Downie, with bandmates, guitarist Paul Langlois, guitarist Rob Baker, bassist Gord Sinclair, and drummer Johnny Fay. are the Tragically Hip. On August 20th, live on CBC TV, radio and the web, Canadians can join together in perhaps the most memorable rendition of “Bobcaygeon“, ever, when the constellations might “reveal themselves one star at a time”.