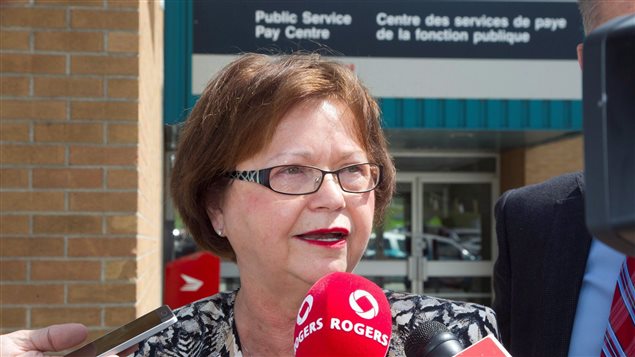 Beleaguered Public Services Minister Judy Foote met the media after touring the government's centralized pay centre in Miramichi, New Brunswick on Wednesday. She's laying some of the blame for problems with the Phoenix payroll system on a lack of training for staff.
Photo Credit: CP Photo / Ron Ward

The federal government is taking another crack at solving the pay problems affecting over 80,000 government employees.

Government managers, workers and union officials are meeting Thursday in Ottawa to discuss what can be done to fix the new–and dysfunctional–Phoenix payroll system

Phoenix was introduced last year by the Conservative government and rolled out earlier this year by the Liberals to handle the pay of Canada’s 290,000 federal civil servants.

But 720 of them–mostly new hires and students–have not been paid at all–in some cases for months.

Another 11-hundred have not received paternal, long-term disability or severance payments.

More than 80,000 others, entitled to supplementary pay for extra duties, overtime or pay adjustments have had problems.

The failure as left many of the public employees with maxed out credit cards, unpaid bills and tanking bank accounts.

She said staffers are doing their job well, but too many others lack adequate training.

Foote says 486 staffers were paid Wednesday, but the rest must wait until the next pay period.

The union that represents the workers, the Public Service Alliance of Canada, blames the software.

With CBC, CP and RCI files.