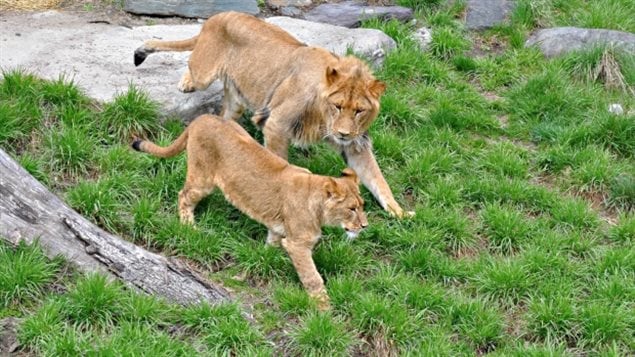 There are few details about how a lion came to attack an employee of Granby Zoo in the province of Quebec.
Photo Credit: Granby Zoo/Facebook

Lion shakes zookeeper by the neck

A 20 year-old employee of Granby Zoo, east of Montreal, is in hospital with severe injuries after being attacked by a lion yesterday. The young woman had been preparing three lions as part of the normal morning routine when of the felines pounced on her. A second employee sprayed the lion with water from a hose causing it to back off so she could be rescued.

The injuries include a fractured vertebra and lacerations but after surgery the patient was said to be in stable condition.  She is expected to make a full recovery.

The zoo is investigating the circumstances of the attack as is the provincial government’s body responsible for worker safety. The incident could have to do with a defective door that may have allowed the zookeeper and lion to be in the same enclosure.

The incident has raised questions about the fate of the lion. The zoo’s administration says the lion exhibited normal behaviour normal and was following her natural instinct so she would not be put down.

The attack provoked renewed debate on the value and ethics of keeping animals in zoos.