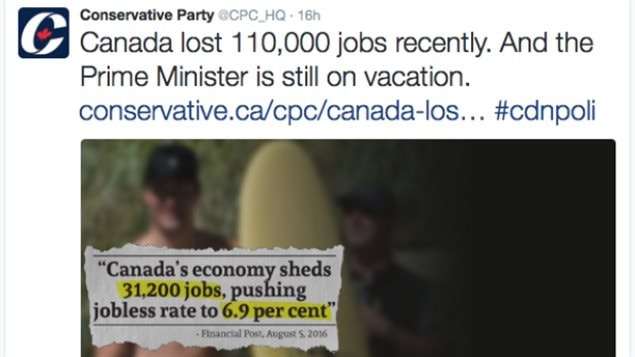 Photographer Marnie Recker said the Conservative Party had no right to use a photo she took to complain about inaction on job losses.
Photo Credit: Marnie Recker

A photographer has demanded the opposition Conservative Party stop using a photo she took of Prime Minister Justin Trudeau without his shirt on, reports CBC. Marnie Recker took the picture during a wedding shoot on a beach in western Canada. The prime minister had been surfing and accidentally walked into the shot.

The Conservatives used the photo to complain on social media that the leader was on vacation while Canada lost 110,000 jobs, said Recker, adding they used the photo without her permission.

Use ‘is unlawful,’ says photographer

“For a national political party to take my photo, which is clearly watermarked, blow it up so the watermark isn’t visible and use it in this way is unlawful and they should be held accountable,” Recker said in a written statement Wednesday.

Recker hired a lawyer to get the Conservative Party to remove the image, which it did. But a party spokesman responded to CBC’s request for comment by saying “it’s unfortunate there’s much more interest in, and concern about, a shirtless photo of the prime minister over the 110,000 jobs lost in Canada in the last two months.”

There has been buzz about a couple of recent shots of the prime minister without his shirt on, but this being summer, it could well be that many Canadians are on vacation and just don’t care.