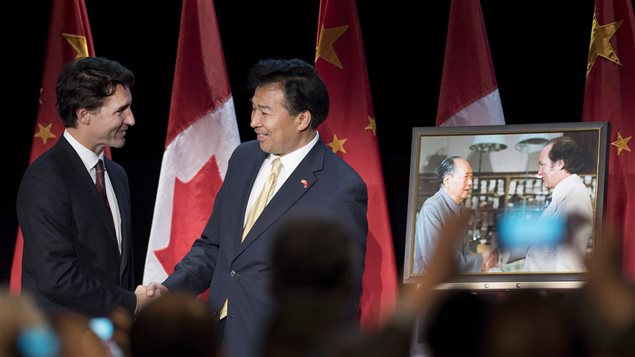 Prime Minister Justin Trudeau goes to China on August 30th for an official visit until September 6, when he will take part in the G20 leaders’ summit in Hangzhou, China on September 4th and 5th, 2016.

With the announcement, Trudeau said, “On this trip, I will strive for a closer, more balanced relationship between Canada and China.” That may be a lot easier said than done.

Invited by Premier Li Keqiang, the visit comes amid growing concerns with both a trade dispute over Canada’s canola crop, and the sovereignty challenge in the South China Sea.

China is eager to establish a free-trade deal with Canada, but already the Prime Minister has signalled it will be some years in the making.

“53,000 Canadian farmers will be negatively affected”

Professor Charles Burton, of Brock University, is a former counsellor at the Canadian embassy in Beijing. He says the dispute over canola exports will be “a major, major issue in all of the Prime Minister’s discussions.” He points out that Canada already has a three to one trade deficit with China, and that in this particular dispute, 53,000 Canadian farmers will be negatively affected.

Canadian officials are now in China trying to resolve the canola dispute before the September 1st, 2016 deadline for stricter inspection standards imposed by China’s quarantine authority.

At the heart of the dispute is China’s longstanding concern about blackleg disease spreading from Canadian canola into Chinese rapeseed crops (another name for the oilseed). Traders, however, suggest that the real concern is China’s domestic rapeseed stocks are plentiful.

The new inspection standard would allow only 1 per cent foreign material, such as straw, per shipment, compared with the current 2.5 per cent. The result is increased cleaning costs and risk according to exporters.

Canadian exporters, including Viterra Inc. Cargill Ltd. and Richardson International, would lose their largest market. In a recent interview in Canada’s Globe and Mail newspaper, Guy Gallant, spokesperson for Canadian Agriculture Minister Lawrence McAuley, said, “There’s an expectation from all that we meet in the middle here.”

If the trade dispute cannot be resolved to Canada’s satisfaction, there is recourse to the World Trade Organization.

The South China Sea dispute is not so easily settled. Professor Burton says it is “a major barrier in our relations.” China’s claim to 85 per cent of the South China Sea is not consistent with the terms of the UN Convention on the Law of the Sea, which China signed in 1982.

A global issue with many players, Professor Burton says, Canada supports the idea that it’s illegal under international law for China to be occupying the islands that they’re occupying and that the land reclamation and development of military bases and airstrips is a violation of international law that China should not be doing that because that area of the South China Sea should be international waters and not subject to the sovereignty of any country.”

It remains to be seen how this sovereignty challenge will play out internationally and how it will affect Canada-China relations. But Justin Trudeau will arrive, according to Burton, with “enormous credibility”.

He says like the current Chinese president who is also the son of an important former leader in China, Justin Trudeau benefits from his father’s outreach to China when the communist country was still very isolated from the west. In 1970, then Prime Minister Trudeau recognized the People’s Republic of China, becoming one of the first Western countries to do so.

Pierre Trudeau had great admiration and respect for Chairman Mao and Xiao an Li, the Chinese leaders at the time.

“The Chinese government put a lot of stress on personal relations and Justin Trudeau is starting with a considerable advantage because of the legacy of his late father,” Burton says.