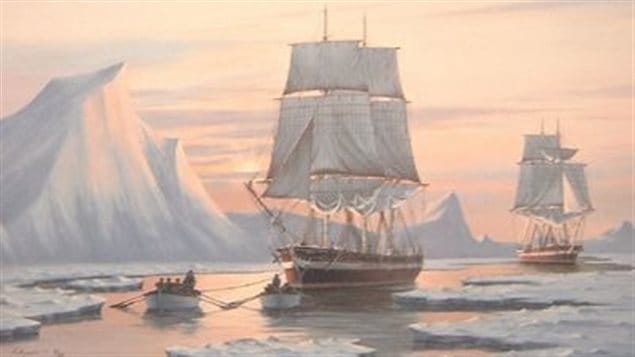 The search for Terror continues (HMS Terror that is)

It was and remains one of the longest maritime mysteries ever.

At the end of this month Canada will continue the search to solve another part of that mystery.

What happened to the 1845 Franklin expedition’s ships and crew in their own search for the fabled Northwest Passage across the Arctic seas of Canada to the Orient.

In spite of several organized search attempts in the 19th century, Franklin’s two ships, Erebus and Terror, were never found.  One of the searches discovered the graves of three of the 129 crew on Beechey Island, but the rest of the crew and the ships remained lost.

Then after years of intense and high-tech searches by a combination of Canadian agencies,  the wreck of HMS Erebus was finally found in the Queen Maud Gulf in September 2014 on the seafloor at a depth of about 11 metres.

The Canadian government through the agency Parks Canada, the Royal Canadian Navy, Canadian Coast Guard, and the Arctic Research Foundation will shortly be setting off on the nine-day “Mission Erebus and Terror 2016” in an effort to locate the HMS Terror. The mission will begin at the end of the month.

Parks Canada’s Underwater Archaeology Team will also be diving on HMS Erebus to document any changes to the wreck since their last visit to the site in the summer of 2015.

Earlier this year, the government announced a $16.9 million dollar support over five years to continue research on HMS Erebus, and for the ongoing effort to locate  HMSTerror