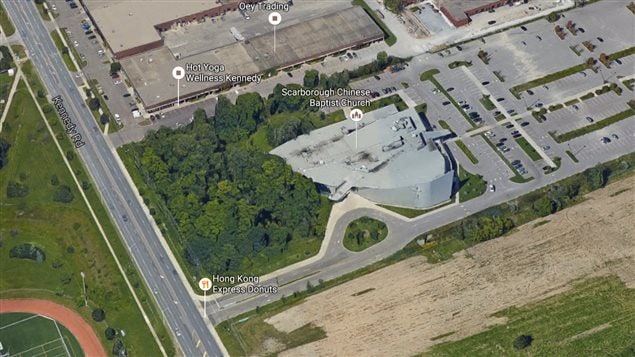 The Scarborough Chinese Baptist Church (near Toronto Ontario). The Vimy Oaks planted almost 100 years ago are in the forested area beside the church, A deal has been worked out to preserve the trees should the church wish to expand.
Photo Credit: Google Earth

Saga of the historic WWI Vimy Oaks: France to Canada to France

The historic and nation-building Canadian victory at Vimy Ridge during the Great War is a fairly well-known one.

Some 100 years ago Lieutenant Leslie H. Miller, a signaler with the Canadian Expeditionary Force in France, recognized the significance of the terrible battle and sought some form of commemoration.   He found a blasted oak tree on the battlefield and gathered acorns which he brought home with him to plant on his family farm in Scarborough, Ontario (Toronto suburb).   That battle, as well as prior and subsequent fighting meant all the original trees around Vimy were destroyed.

The acorns in Canada however grew into large majestic oak trees on his land which he later named ‘Vimy Oaks Farm”.  Now, some in the remaining forest grove are from the original acorns, and some are descendants of the ones Miller planted.

Miller died at age 90 in 1979. The land was left unattended for many years, but now belongs to the Scarborough Chinese Baptist Church. It is considering expansion and there were originally some concerns that might mean expansion into the small forest patch where the Vimy oaks are located.

Concern about the future of the Vimy trees as the 100th anniversary of the battle approaches in 1917, arose among some residents and city councillors.

An attempt by local citizens to have the grove declared an historic site was challenged by the Chinese church which didn’t want any restrictions on possible future expansion.

However, in the end the Scarborough City Council voted against an official heritage designation and the church insists that the trees will be protected.

(**Update:  in a letter below, the church denies it ever had any intention to cut down the oaks, that they were never threatened, and in a submission to the Toronto Preservation Board, insist they have been good stewards of the trees since they learned of their historic significance)

Councillor Jim Karygiannis is quoted by CBC saying,  “One of the things we’re going to do is have some sort of a commemoration as well as designate this an area where people can go to celebrate the hundred years, and we’re trying to come up with some money to see what we can do with the place”.

Local historian Richard Schofield who had been among those calling for heritage status later said that although the trees seem protected now, “who knows 50 years from now who’ll own the property and whether the bylaws [protecting trees] will have changed”.

The seedlings are being grown as a project to return these descendants of the original oaks back to Vimy for the 100th anniversary in April 2017.