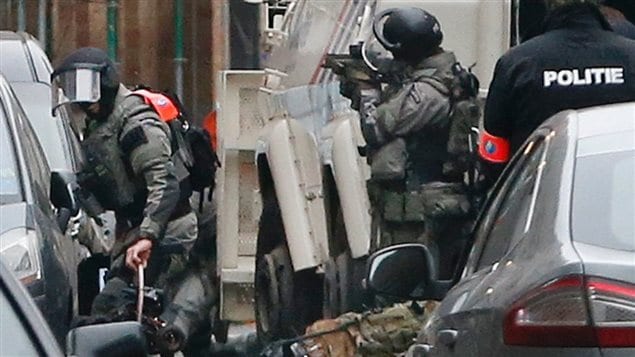 2016: Police in Belgium surround the house and after gunfire back and forth, later arrest Salah Abdeslam, a 26-year-old suspect in last year’s deadly Paris attacks which killed 130 people. A survey shows a majority of Canadians are now concerned about safety when travelling abroad.
Photo Credit: Francois Lenoir/Reuters

Canadians becoming desensitized to terror stories, but concerned about travel

It seems almost every night, the news reports some horrific terrorist act, mass shooting, deliberate airline crash, bombing, or some other form of violence.

One of the largest international polling firms has conducted a survey of Canadian attitudes to such news stories..

The results seem to indicate many Canadians are becoming desensitized to these reports.

Commissioned by the Canadian TV network ,Global News, Ipsos polled Canadians about their attitudes towards news reports on  several subjects.

They found that almost half (47%) of Canadians say that when they hear news like this ‘it doesn’t surprise or shock them’.

Police violence in the US is very widely covered in Canada, and in this case, Canadians again are roughly split. Some 52 percent say “the issue has been blown out of proportion’ with 19 percent of that segment saying they agree strongly with the statement.

In both cases, there are marked differences between men and women, more men say they’re not surprised by news of terror attacks, and agree that US police violence is exaggerated.

There were some regional differences such as the police violence issue where the mainly French-speaking province of Quebec had a much higher percentage of people saying it was being blown out of proportion, (71%) compared to the next highest province Alberta (51%)

Asked about travel safety, six out of ten Canadians said they’d be worried about their safety if travelling to the US, That number increases when considering travel beyond North America.

This seems to be reflected in news reports that tourism is significantly down in Paris and generally throughout Europe this year.   Indeed many schools in Canada have cancelled planned trips to Europe this year over terrorism concerns. Canadian travel agents have also reported some planned trips abroad have been cancelled due to security concerns.

In January, six Canadians working on a humanitarian mission were killed in a terrorist bombing attack in Burkina Faso.  In June, two Canadian tourists were kidnapped by an Islamic terror group in the Philippines and later killed when no ransom was paid, In 2008, two Canadians were among the dead following the Islamic terror attacks on Mumbai, India, hotels.

Safety concerns about travelling abroad were somewhat higher in women than men, and also increased with older age groups.

Although Canada has had some terrorist incidents, including the killing of two soldiers in two separate incidents by Islamic sympathizers, and police foiling some other plots, a separate poll showed 6 out ten Canadians felt safe in this country, but also strongly support increased security measures at airports,  increased screening of immigrants and refugees, and metal detectors and armed guards at public places.

A third poll by Ipsos this month found more Canadians, about 72 percent supported the idea of sending Canadian troops to fight ISIS, but are roughly split on whether the government is doing enough to fight ISIS.