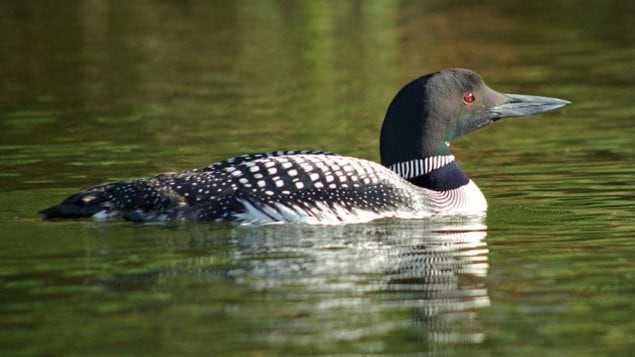 The common loon: Its haunting call is often felt to represent the sound of Canada and its lakes and wilderness. It’s on our one dollar coin, and is a currently leading in the poll for a national bird.
Photo Credit: Flicker-Ano Lobb via CBC

Choosing a national bird for Canada.

While many might think the Canada goose is Canada’s official bird, Canada actually doesn’t have an official bird

The process to change that is going on right now in hope of naming one for Canada’s 150th birthday next year.

Canada is home to some 450 bird species and the Royal Canadian Geographical Society (RCGS)  is asking Canadians for their choice in “The National Bird Project”.

The common loon, also featured on Canada’s one dollar coin, is currently leading with over 11,000 votes. That’s followed by the snowy owl at over 7,000.

Federally Canada has been a bit slow in choosing a national bird whereas the provinces have already chosen some of the more popular possibilities.

For example the loon and snowy owl are already the official birds of the provinces of Ontario and Quebec respectively, as are other contenders in the national bird list, including the puffin (Newfoundland and Labrador), Blue Jay (P.E.I),  and the black-capped chickadee (New Brunswick)

Being an official provincial bird may put them out of contention for national bird status.

Others have said some other popular choices are migratory birds, and it somehow just doesn’t seem right to name a national bird as one that spends half its time outside the country.

The RCGS says people like to associate certain traits of the birds to those considered to be Canadian, such as resourcefulness,  intelligence, and sociability.

Some ornithologists have suggested the grey jay ( Perisoreus canadensis) as a good choice. The grey jay is also known as the ‘whisky-jack’ an Anglicized version of an Algonquin aboriginal word meaning a mischievous spirit who likes to play tricks on people.  The grey jay is found all across Canada and almost not at all in the US. It is also a bold bird often raiding campsites for scraps of food hence its reputation as mischievous. It’s also hardy, living in Canada’s boreal forests all year, even breeding in late winter.

The RCGS says they will make a recommendation of their choice to the federal government in time for the government to make an official choice as part of the Canada’s sesquicentennial (150 years) in 2017.

The RCGS says however most popular choice in the survey will not necessarily be the one they recommend as there are other factors involved.