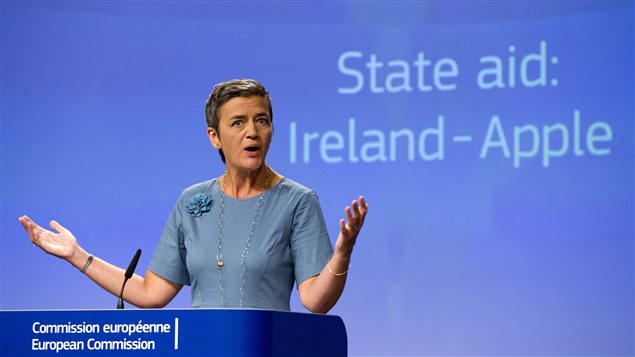 Advocates for fairness say the Canadian government should take a cue from the European Union and start taxing big corporations that make profits in Canada. The EU says Ireland has given illegal tax benefits to Apple Inc. and has ordered the corporation to pay 13 billion euros ($19 billion Canadian) in back taxes plus interest. Apple says it will challenge the decision.

Europeans fed up with austerity

The ruling is a bold move by the EU executive commission in its ongoing fight to have multinational corporations pay their fair share of taxes. Europeans have become increasing angry about corporate tax dodging after years of government budgets cuts and financial crises. And smaller companies have complained they are unable to get the same kind of tax considerations and face unfair competition.

“Even though the Irish corporate tax rate is an already-low 12.5 per cent, they (Apple) had a special deal that actually meant they were paying 0.005 per cent. I mean it’s outrageous,” says Dennis Howlett, executive director of Canadians for Tax Fairness.

“Basically they were paying nothing. And they were transferring 99 per cent of their profits from Europe, Africa, the Middle East and India to a phantom head office in Ireland with no employees, no premises and no economic activity. So the European Union stepped in and said ‘you can’t do this. It’s unfair and it contravenes European rules.’”

In the same way, Canada loses between 10 and 13 billion dollars a year because of “fuzzy tax laws,” Howlett estimates, saying corporations like Google, Facebook and Amazon make profits in Canada but get a special tax exemption under the presumption that they don’t have an economic presence in Canada.

“That’s ridiculous,” he says. “They’re gobbling up almost 40 per cent of the online advertising dollars undermining advertising revenue for newspapers and broadcasters. And that results in job cuts here in Canada. It’s unfair.”

Howlett says it’s time Canada modernize its tax laws and not allow companies to set up “sham offshore subsidiaries” that have no economic substance but are treated as separate entities for tax purposes.

The recently-elected Canadian government is cracking down on tax dodges by wealthy individuals. Howlett says it’s time for it to “take the next obvious step and start dealing with corporate tax dodging.”