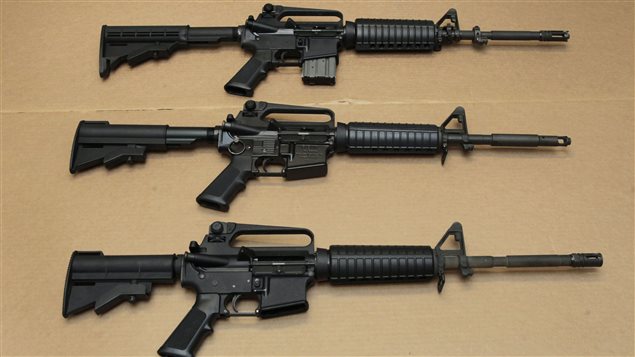 The Liberal government has rejected an e-petition to reclassify the AR-15 rifle as an unrestricted weapon.
Photo Credit: Rich Pedroncelli

Canada’s federal government is refusing to change the restricted status of the popular Armalite AR-15 family of semi-automatic rifles despite an e-petition that has gathered more than 25,000 signatures from gun enthusiasts across the country.

Writing in response to the e-petition launched by Marc Bennett of Cornerbrook, N.L., and sponsored by Conservative MP Bob Zimmer, Public Safety Minister Ralph Goodale said he “has no intention of using section 117.15 of the Criminal Code to change the classification of the AR-15.”

“The government is committed to putting decision-making authority about weapons classification back into the hands of police, not politicians,” wrote Goodale, pointing out that the government believes in striking a balance between public safety and ensuring firearms owners are treated fairly under the law.

“The Royal Canadian Mounted Police is responsible for the technical determination of the classification of firearms in accordance with the criteria stipulated by Parliament in the Criminal Code.”

However, its restricted status means that gun owners must have a restricted firearms licence, which requires undergoing an additional firearm safety and handling course, a mandatory membership at a registered shooting club or range, as well as severe restrictions on the transportation of the firearm.

Supporters of the petition, called E-111, claim that these restrictions on the AR-15 and its variants prohibit “the use of this semi-automatic modern sporting rifle from being used for lawful purposes such as hunting.”

“This rifle is the most versatile hunting rifle in the world,” the petitioners wrote. “The calibre can easily be changed to meet lawful provincial hunting requirements from small game to big game animals, without the need to purchase multiple gaming rifles.”

And while the AR-15 has gained notoriety in the United States as the weapon of choice in some of the bloodiest recent mass shootings, such as the San Bernardino shooting in December and the Sandy Hook elementary school shooting in Connecticut in 2012, the petitioners believe it is no more dangerous than many other, non-restricted rifles.

Goodale said the AR-15 is restricted because it is “a named variant of the restricted M-16 rifle.

“The AR-15 is restricted because of its lineage to the military-issued M-16 assault rifle,” he wrote.

Tony Bernardo of the Canadian Shooting Sports Association told CBC News he is particularly disturbed about the government’s decision to leave firearm classification to police.

“What is very concerning is that we’ll let the police decide what our firearms laws are,” he said. “The last time I looked, we elected parliamentarians to the House of Commons to decide what our laws are, not police officers.”

“Police officers jobs are to enforce the law — not create it.”

“I think that’s an appropriate decision,” Wendy Cukier of the Coalition for Gun Control was quoted by CBC News.

“Most countries around the world, at least industrialized countries, prohibit civilian access to the AR-15 because it is a military weapon,” she said. “So the fact that it is even available on a restricted basis in Canada, from our perspective, is a problem.”