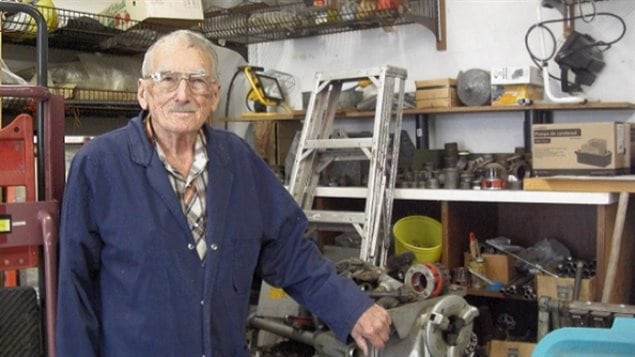 Lorne Figley is at work today fixing leaks, attaching pipes, repairing heating systems and so on, just like he’s been doing for years, many years,…. many many years.

At age 92, Lorne is has now officially been recognized as the world’s oldest plumber.

The news came this month from the Guinness World Record organization.

Lorned Figley operates his own company, Broadway Plumbing and Heating in Saskatoon, Saskatchewan, as he has been doing for 65 years.

He started the business with four buddies in 1947 after his army service in the Second World War during which he helped in the liberation of Holland.  He later took additional plumbing and journeyman courses and bought them out to operate the business on his own.

He attributes his longevity in part to his desire to keep learning.

“I’m addicted to learning so I’ve taken virtually hundreds of classes about things and I think that’s what keeps you going” he said.

He also gave a bit of advice to young people saying that plumbing is a good trade and that “you’ll never be out of work”.  He notes that it is a trade best suited to those with strong math skills and problem solving ability.

Figley still makes a couple of house calls a day to repair plumbing, heating, and airconditioning problems and has no plans to retire.

“Working helps keep my body fit and my brain sharp,” he said. “I hope to die with a pipe wrench in my hand”.