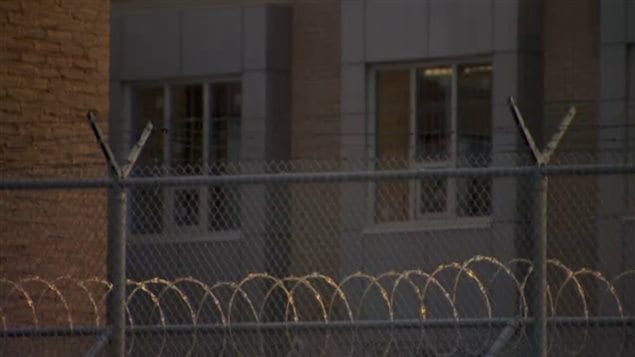 The End Immigration Detention Network says 15 people have died in detention while in CBSA custody since 2000
Photo Credit: CBC

A group of immigration detainees at the Central East Correctional Centre (CECC) in Lindsay, Ontario, have been on a hunger strike for over two weeks to protest Canada’s immigration detention system, says a migrants’ rights advocacy group.

On Wednesday, only four detainees were able to continue the protest, the third such hunger strike by immigration detainees this year, Scott said.

“They are fighting for the same demands, the main one being the presumptive period, that they be released after 90 days if they are not deported,” Scott said.

(click to listen to the full interview with Macdonald Scott)

Most countries have a ‘presumptive period’ – a period of time that a person without immigration status can be held in jail in order to deport them, Scott said.

“In the U.S. this is ninety days, with the possibility of a 90 day extension,” Scott wrote in a recent newsletter. “But in Canada, there is no presumptive period – in other words – no limit to how long a person can be held in a immigration detention centre.”

The detainees are also asking for a one-on-one meeting with federal Public Safety Minister Ralph Goodale to discuss the issue with him, he said.

Migrant rights advocates have argued that indefinite detention is unconstitutional, and have brought the issue before the United Nations Human Rights Commission.

The hunger strikes by immigration detainees have turned this into a national issue, forcing the government acknowledge that there is a problem and make some changes, Scott said.

The federal government recently announced new initiatives to improve Canada’s immigration system, including up to $138 million to transform the detention system in Canada.

“But what the government is doing it’s making the wrong changes,” Scott said.

Instead of releasing detainees if they can’t deport them, Ottawa is planning to build more jails, he said.

Detention is a measure of last resort and is used to maintain national safety and security, said Nicholas Dorion, a spokesman for the Canada Border Services Agency, which administers the federal immigration detention system.

CBSA officers detain foreign nationals and permanent residents when there are reasonable grounds to believe the person is inadmissible to Canada and is considered a danger to the public, a flight risk or can’t prove his or her identity, Dorion said.

According to the CBSA, there are, on average, 450 to 500 people who are detained at any given time under the Immigration and Refugee Protection Act across Canada.

According to CBSA statistics obtained by The Guardian newspaper, 6,768 individuals were detained from April 2014 to March 2015. Of those, 2,366 were released and 3,325 were deported from Canada. A person could be detained and released more than once, Canadian authorities told The Guardian. The average length of detention was 24.5 days. But for those who end up entangled in a deportation dispute with another country, the legal limbo can stretch to years.

A study by McGill University researchers that looked into the impact of detention on mental health of immigration detainees found that even brief periods of incarceration (average 31 days) can lead to significant increases in mental health issues such as post traumatic stress symptoms and depression.

The End Immigration Detention Network says 15 people have died in detention while in CBSA custody since 2000 – three in just the last six months. At least eight of the deaths took place in Ontario provincial prisons.

Staff at the CECC in Lindsay continue to monitor the physical and mental health and well-being of CBSA immigration detainees refusing meals, Dorion said.