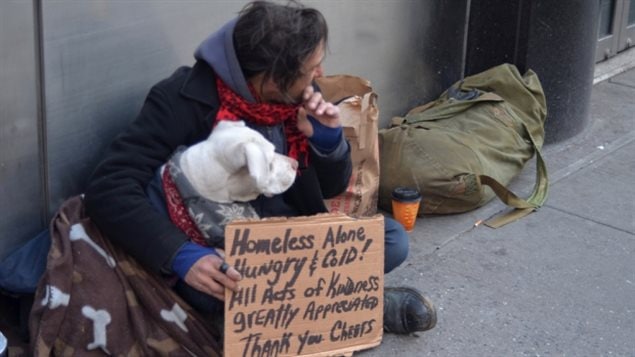 The first comprehensive study of youth homelessness has been released in Canada
Photo Credit: Shutterstock via CBC

Homelessness and youth in Canada

For the first time a new study takes a comprehensive look at youth homelessness across Canada.

The study released this month, is called “Without a Home: The National Youth Homelessness Survey” (link at bottom)

Stephen Gaetz (PhD) is lead author of the study. He is a professor at York University in Toronto, and Director of the Canadian Observatory on Homelessness.

Authors Gaetz; Bill O’Grady; Sean Kidd; and Kaitlin Schwan examined the situation and causes of why and how young people enter into homelessness.

With over 1,000 respondents from several dozen cities across almost all of Canada’s provinces and territories they found that many young people’s first experiences with homelessness can start in their early teens.

In many cases, social services are not available until they reach age 18, which the study says, is often too late.  In fact, the study found that 40 percent of homeless youth were younger than 16 when they first experienced homelessness.

Gaetz says that such children suffer greatly the longer they are “on the street” and by the time services become available to them, much damage, psychological and physical may have already occurred. He says this makes recovery even more difficult for youth, and more costly to society in both the short and long term

Professor Gaetz says too often the current solutions for youth homelessness are merely versions of the solutions for adult homelessness.  Youth have much different needs if they are to break the continued cycle of homelessness, poverty, and addiction.

Professor Gaetz notes that other countries are doing better in dealing with youth homelessness, such as Australia.  The report says Canada can do better by not treating this in crisis response, but trying to stop homelessness in the first place.

This could be through early intervention in family situations to mediate conflicts. Another method is through  bringing services and supports directly to young people through school, community centres, help lines. At school there could early identification of at-risk youth to help them stay in school, at home, and off the street. Where possible and needed, housing for youth should be developed.

Key to this approach is that young people are provided with a range of supports that will help them maintain housing, learn life skills, have positive relationships with peers and adults, and re-engage with school, employment training, and/or employment.

Professor Gaetz this first national study provides a baseline for development programmes. He says the study is freely available for any and all to read, but hopes especially that it will come to the attention of politicians and policy makers so that action can be taken.