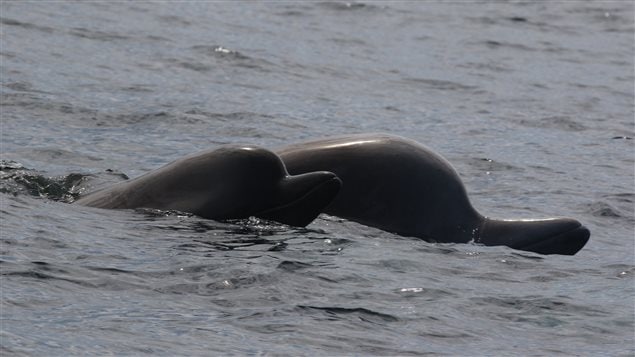 Scientists have found a new population of Northern bottlenose whales off Canada’s east coast and are worried they will be harmed by seismic testing for oil and gas. This type of whale is typically about 10 metres long. It dives deep to feed on deep-water squid and must come to the surface to breathe. As one of the world’s deepest diving mammals, these whales are known to plumb depths of 1,453 metres.

‘They come around our boat’

An older population of Northern bottlenose whales off the coast of the province of Nova Scotia has been studied for about 25 years by scientists including Hal Whitehead, researcher and professor of biology at Dalhousie University. “When they’re up at the surface, they come around our boat and other people’s boats and make rude noises and look at us. So, they’re delightful creatures.”

Whales are known to navigate and communicate using sound. A few months ago, Whitehead and others recorded general sound in the water up and down the Grand Banks, which is a shallow shelf that extends off Canada’s Atlantic coast before dropping steeply. When they processed the sound, they heard the new population of these whales, but they also heard seismic testing going on close to them.

“There’s been increasing concern that sound affects animals in the ocean—fish, turtles, but perhaps especially whales,” says Hal Whitehead, researcher and professor of biology at Dalhousie University. He says beaked whales like the Northern bottlenose whale may be particularly affected.

“We don’t quite understand why they’re so vulnerable, but it looks like large sounds quite often kill them. They certainly disturb them, change their foraging.”

There are voluntary measures to mitigate sound but Whitehead says they are not being applied. He and other scientists want the petroleum industry to take a precautionary approach and avoid seismic testing where these whales are.

“If we want these animals to keep being here, we’ve got to be sensitive about their environment,” says Whitehead. “Sound is what they depend on and sound can kill them.”

One of two populations of Northern bottlenose whale is listed as ‘endangered’ and the other is ‘of special concern’ under Canada’s Species At Risk Act, a law designed to protect animals.