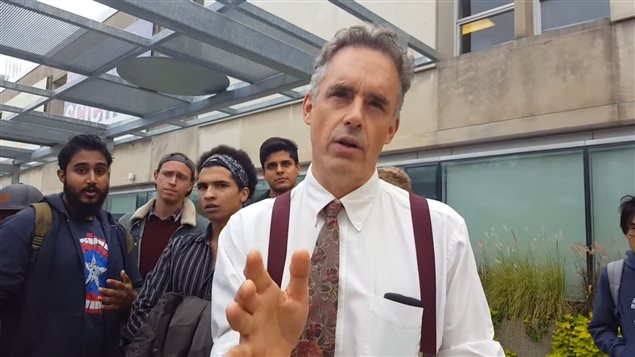 Video grab of Professor Peterson attempting to discuss and explain his position to an agitated crowd of protestors.
Photo Credit: YouTube

It is to say the least, a complicated and controversial situation.

Gender activists who are transgender or who identify as neither male nor female (“non-binary”) or who otherwise identify themselves as being somewhere along the gender continuum, want to be identified by new words they say are gender neutral.

Instead of the English pronouns he, she, him her, some say the individual should be addressed as the plural “they”, or new words like “ze, xu, hir,zim, zer, thon, zhe, ve” and others.

A new federal bill (C-16) making its way through Parliament would seem to enshrine gender rights and such language into law.

Clinical psychologist Professor Jordan Peterson,is now at the center of the storm for choosing not to use such words. He is a recognized expert on personality and the psychology of religion at the University of Toronto. He has also spent decades studying the psychology of totalitarian regimes.

Professor Peterson says he chooses not to be obliged to use pronouns invented by “ideologues”. What’s more he says, is his objection to the liklihood of being forced by law into using such words with the threat of severe, possibly life-damaging consequences and penalties.

He says the whole issue is taking society down a very divisive path and a very dangerous legal one as well.

According to Peterson, Ontario’s so-called “social justice tribunals” will operate in a quasi-judicial manner but have granted themselves sweeping powers and which he says will ignore or bypass fundamental principles of our common law legal system.

At present he has been sent two warning letters by the University saying he is in contravention of their policies for making the video saying he wouldn’t use the invented pronouns.

He also said that in doing so, the university seems to have forgotten about their policy on free speech.