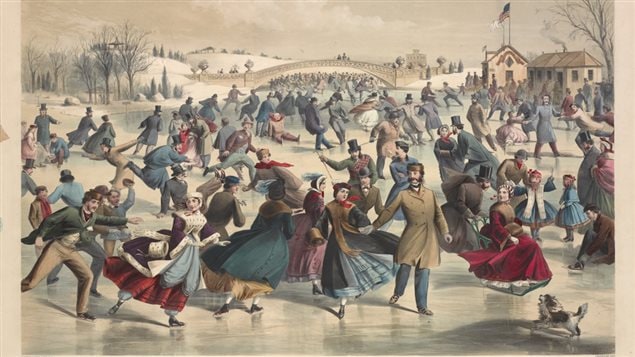 Skating and hockey have been central themes in Canadian life and a new book looks at the facilities we have played in and the influence they have in urban, social and political life. Architecture on Ice: a History of the Hockey Arena was created by Howard Shubert, a former curator of prints and drawings at the Canadian Centre for Architecture.

First rinks were built in Canada

Early on, people skated on lakes and ponds in Europe and elsewhere, but there was often a danger of falling through the ice. But it was in Canada that the idea first took hold of spraying the ground or other surface with water to create an artificial ice surface, thus eliminating the danger.

The first rink was made this way in Quebec City in 1852. From there the idea took off. Some rinks were made in barns and then, buildings were erected to cover the rinks. Says Shubert, plans accommodated the fact that skating was a social sport.

“Originally people skated, but they also danced on skates. So, music was a significant part of how these buildings functioned. Most of the early buildings had bandstands…often right on the ice surface.

“People came and there were festivals. People dressed up in costumes for costume balls and they were written up in the newspapers. And there was music that was composed especially for ice skating.”

In the 1870s, hockey became a popular sport and arenas were built to accommodate games. That changed the way the game was played. When it was played on ponds and lakes there were unlimited players and the games could go on for hours. The size of the ice surface in arenas meant the number of players had to be limited and the time played as well.

Arenas underwent further evolution, not always appreciated by hockey fans. Now, there are postmodern complexes which are more versatile and are used for hockey as well as concerts and other entertainment.

The book has remarkable illustrations and illuminating thoughts on just how the buildings affected the experience of recreational activities.