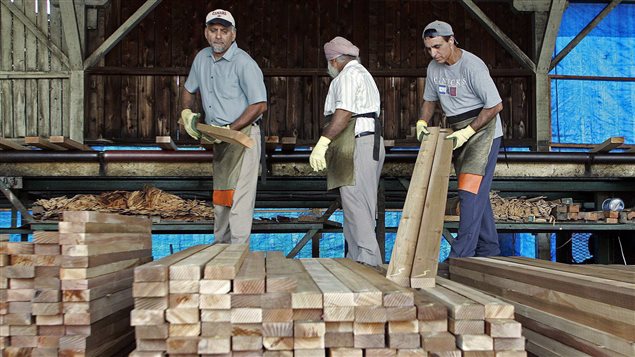 The office of Canada’s International Trade Minister Chrystia Freeland is warning Canadian softwood lumber producers to prepare for a potentially costly trade war with the U.S.

In an email sent to RCI and a number of other media Alex Lawrence, Freeland’s spokesman, warns the U.S. Lumber Coalition is expected to submit petitions to the Department of Commerce today, requesting an investigation in the ongoing softwood lumber dispute.

Softwood lumber is excluded from North American Free Trade Agreement and lumber producers in both countries continually clash over whether the ability of Canadian companies to access forests on publicly owned lands constitutes an illegal subsidy.

Zoltan van Heyningen, executive director of the U.S. Lumber Coalition, confirmed that the Committee Overseeing Action for Lumber International Trade Investigations or Negotiations (COALITION), an ad hoc association of softwood lumber producers and forest land owners, today petitioned the U.S. Department of Commerce and the U.S. International Trade Commission “to restore the conditions of fair trade in softwood lumber between the United States and Canada.”

“The COALITION petition alleges that Canadian provincial governments, which own the vast bulk of Canada’s timberlands, provide standing trees to Canadian producers for an administered fee that is far below the market value of the timber, as well as a number of other subsidies,” van Heyningen’s emailed statement read. “In addition, the COALITION petition alleges that Canadian lumber is being sold for less than fair value in the United States.”

In the immediate aftermath of the expiration of the 2006-2015 U.S.-Canada Softwood Lumber Trade Agreement, Canadian imports surged from 29.5 percent of U.S. total consumption in the third quarter of 2015 to 33.1 percent in the fourth quarter of the same year and to 34.1 percent so far in 2016, van Heyningen alleged.

The volume of imports from Canada in the first 8 months of 2016 was more than 33 percent higher than in the same period of 2015.  Canada’s gain in market share came at the direct expense of U.S. producers, he said.

“The COALTION’s legal action seeks for the United States to impose duties to offset the harm caused to U.S. mills, workers and communities by Canadian softwood lumber production subsidies and Canadian producers dumping the subsidized merchandise on the U.S. market,” the statement said.

Susan Yurkovich, President of the British Columbia Lumber Trade Council, she was “disappointed that once again we are in litigation rather than working cooperatively with the U.S. industry to grow the market for wood products in North America.”

British Columbia is the largest Canadian exporter of softwood lumber to the U.S.

“The claims levelled by the U.S. lumber lobby are based on unsubstantiated arguments,” Yurkovich said in a statement. “Similar claims were made in the prior round of trade litigation and were ultimately rejected by independent NAFTA panels which concluded that Canadian lumber was not subsidized and did not cause injury to the U.S. industry.”

Lawrence, says Canada is prepared for any situation and the government will “vigorously defend” the interests of Canadian workers and producers.

The U.S. industry must sign on to any softwood lumber agreement, as it must agree to suspend its legal rights to petition for trade remedy relief for the duration of the agreement.

At the same time, he notes the protectionist climate in the U.S. complicates any trade negotiation, including this one.

“The Minister and our government will continue to work very closely with lumber producers and workers, the provinces, and territories,” Lawrence said. “Canada will only enter into an agreement that is good for our workers and producers.”

The 2006 softwood lumber agreement expired a year ago but a one-year standstill period kicked in to allow an attempt at resolution. It imposed export taxes of zero to 15 per cent on Canadian lumber, growing with market prices and export volumes.