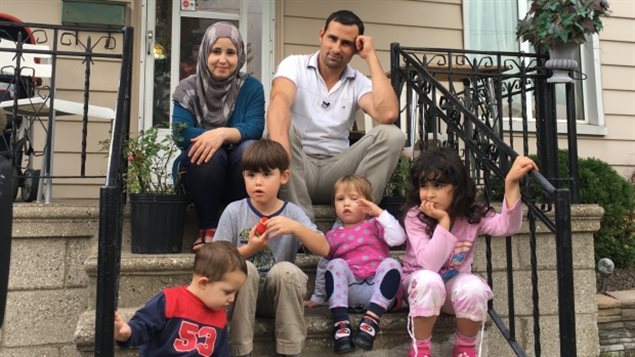 The Tonbari family fled Syria and settled in Windsor, Ontario. Their federal sponsorship is about to end, but other help is available if they need it.
Photo Credit: Susan Ormiston/CBC

The first wave of Syrian refugees arrived one year ago in Canada and soon their funding from the Canadian government or private sponsors will end. Some have found work and those who cannot support themselves will be able to get financial help from their provincial governments.

Alboim says many refugees have found jobs, or are working part-time and pursuing language training. It can be difficult to learn English or French, languages that are written in a different direction from Arabic, and language is a key to getting a good job. Some language training is provided by the federal and provincial governments.

Children have a much easier time of it and Alboim says most of them seem to be doing brilliantly.

“They are adapting very well to school even though many of them have experienced trauma and even though some of them have not been in school for a long period of time depending on when it was they had to escape Syria. But despite that, the kids are doing really well socially, culturally, and linguistically. They’re just sponges. They are picking up everything really quickly.

“(The children) act as gateways for their parents,” says Alboim. “So, when the parents come and drop the kids off at school or pick them up in the afternoon or watch them play soccer they meet other Canadian parents and that intercultural connection really helps in terms of social and cultural integration.”

That said, some refugees are having an easier time than others. There are two types of refugees—those who are sponsored by the Canadian government and those who are sponsored privately by organizations of groups of five or more individuals. In both cases, the financial commitments the sponsors last one year officially. But the private sponsors are more likely to continue to help in many ways and have often formed friendships which do not end after one year.

So far in 2016, Canada has brought in more than 35,000 Syrian refugees. Next year it plans to reduce the number to 25,000. Alboim says that is a problem for many refugees who are anxious to bring in family members who are either still in Syria or are in refugee camps abroad.

Beyond that, which is a deep worry for some, Alboim says most Syrian refugees should do well in Canada. “As long as there is the kind of welcoming that we are experiencing in Canada today…I have every confidence, based on other refugee movements that we’ve received in Canada, that they and in particular their children will do really, really well.”