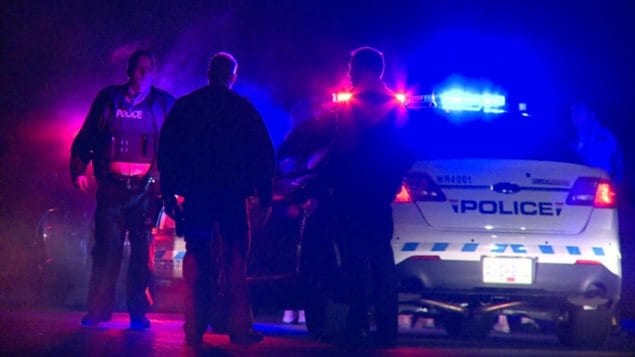 RCMP officers respond to a call following an attack on a home in Surrey, B.C. in January.
Photo Credit: CBC / Rafferty Baker

A new report says more than 530 members of Canada’s federal police force, the Royal Canadian Mounted Police, were injured last as a result of assaults and other violent acts.

The RCMP’s 2015 report, obtained by CBC News, says the injuries usually occurred when officers needed to use force to subdue someone.

The report finds that that effective physical control is better at subduing suspects that using so-called “intermediate weapons” such as a baton or a stun gun.

It adds that the RCMP is “working to make improvements to several intermediate weapons,” including testing more potent pepper spray that can be sprayed farther, testing the newest generation of a stun gun or Taser, and piloting a “general duty 40 mm extended-range impact weapon.”

The report also found that 699 Mounties and civilian employees were injured in slips and falls, resulting in 98 “disabling” accidents that prevented victims from going to work the following day.

The report says the majority of the falls took place on RCMP controlled property and were the result of slippery surfaces (lobby floors during and after rainfall and icy and/or snowy sidewalks).

Another 216 Mounties sustained injuries while driving.

Most of those accidents, the report says, took place during the day in cities where officers were driving at or below speed limits on dry pavement during routine operations and not during emergency calls.

The report also examined injuries to civilians who work for the RCMP.

Exposure to traumatic events, such as answering emergency calls, is responsible for most work-related health problems for those civilians.