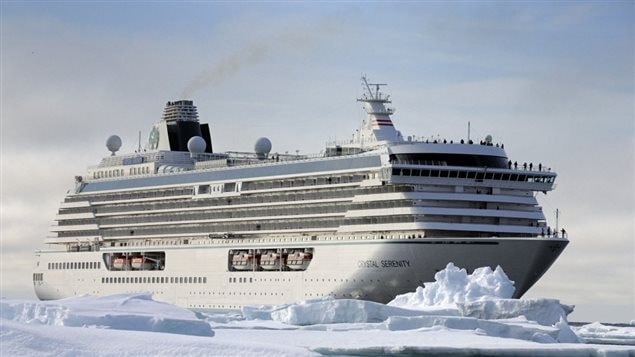 Cyrstal Serenity recently made a voyage through the Northwest Passage across the Arctic.
Photo Credit: Crystal Cruises

Crystal Serenity marks Arctic watershed in 2016, Trump election is the wildcard for 2017: expert

Crystal Serenity’s 32-day voyage across the forbidding Canadian Arctic was the most significant single event in the Arctic in 2016, while Donald Trump’s election could take the U.S. Arctic policy into uncharted waters in 2017, says a prominent Arctic expert.

The highly publicised but otherwise uneventful voyage of the 68,000-ton luxury cruise ship with 1,070 passengers and 665 crew on board marked not only another milestone for Arctic navigation but became a watershed moment for Arctic tourism, said Heather Exner-Pirot, the Managing Editor of the Arctic Yearbook, a Research Fellow with the EU Arctic Forum, and a member of the Board of Advisors for the Arctic Institute.

(click to listen to the full interview with Heather Exner-Pirot)

Billed as the “ultimate expedition for the true explorer,” the cruise liner left Anchorage on Aug. 16, traveled north through the Bering Strait and across the Northwest Passage, making stops in small Arctic communities in the U.S., Canada and Greenland, and then in northeastern United States before completing its journey in New York City on Sept. 16.

“It’s such a juxtaposition in people’s minds to think of the remote, cold, barren Arctic where people have to survive, and then think about the richest of the rich having a luxury vacation as they’re going through the Northwest Passage,” Exner-Pirot said.

This juxtaposition was made even more poignant by the discovery of the second of the lost Franklyn expedition ships HMS Terror during Crystal Serenity’s voyage through the Northwest Passage.

“Hundred-fifty years ago people were getting stuck and dying, and it was treacherous,” Exner-Pirot said.  “Fast-forward to 2016 and it’s a place to see some polar bears, pick up some carvings and have a glass of Champaign with your meal.”

From Canada with love?

In Canada, the year was marked by the shift in Ottawas’s policies towards Russia under the government of Prime Minister Justin Trudeau, Exner-Pirot said.

Canada and Russia held a joint workshop on the Arctic at the Carleton University in Ottawa just over a month ago. Ottawa’s attempts to engage Moscow in a constructive dialogue over the Arctic mark a shift from the policies of deep freeze in relations championed by the previous government of Prime Minister Stephen Harper.

“It is interesting times now,” Exner-Pirot said. “Many of us, myself included, have been calling for a rapprochement with Russia in the Arctic notwithstanding any valid disagreements we have with them elsewhere in the world.”

In the meantime, the election of Donald Trump represents a huge wildcard for 2017, she said. No one knows what the Trump administration’s Arctic policy will be. Yet, the United States still chair the Arctic Council and will host a ministerial summit in Fairbanks, Alaska in May 2017.

“If everything goes according to the plan, it would be State Secretary Rex Tillerson who will be chairing that meeting,” Exner-Pirot said.

For many people in the Arctic concerned about climate change and resource exploitation, having the CEO of Exxon-Mobile, who has lobbied for the lifting of the sanctions on Russia to be able to participate in oil exploration and extraction in the Russian Arctic, direct the U.S. policy in the region is a “nightmare scenario,” Exner-Pirot said.

But while environmentalists fret about Trump’s policies in the Arctic, the government of Greenland welcomes the arrival of a more pro-business, pro-development administration in Washington, Exner-Pirot said.