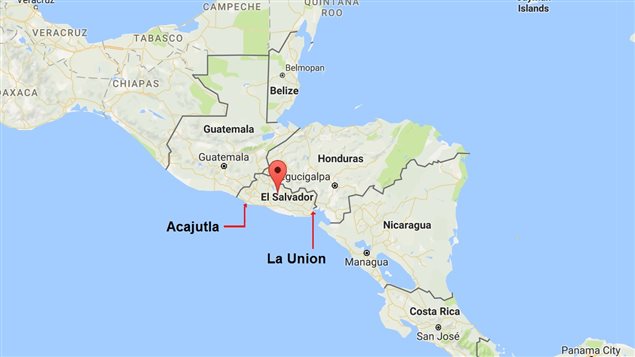 El Salvador is the smallest country in Central America. In the early part of the 20th century almost the totality of its exports consisted of coffee grown in Anglo-American plantations, and transported on Anglo-American railways.

In the interwar years, Canada’s Navy was tiny as well, with a mere handful of ships, none larger than some smallish destroyers.

The US military Attache for Central America, Major, A R. Harris reporting to Washington in December 1931 on the situation in El Salvador  noted that a visitor to the capital would notice a great number of expensive cars on the streets “Packards, and Pierce Arrows”  adding, ” There appears to be nothing between these high-priced cars, and the oxcart with its barefoot attendant. There is practically no-middle class. Thirty or forty families own nearly everything in the country”

Following the financial crash of 1929, unrest over the inequality had gripped the country, followed by a military coup. Peasants armed with machetes and led by communist Augustin Farabundo Marti took over some plantations and couple of towns. Military reprisals were quick and extremely violent.

With the Russian revolution still fresh in people’s minds panicked British and American attaches cabled urgent messages home asking for help in the face of what they perceived (wrongly) as a major and violent communist rebellion. Typically, a response would be to send in the navy to back the military government but also to remind the junta to protect their investments.

It just so happened that two Canadian destroyers were on their way from the west coast to take part in Royal Navy exercises in the Caribbean via the Panama Canal.  Canada itself had virtually no interests in El Salvador, but no British ships were immediately available. The Statutes of Westminster in 1931 affirmed Canada’s independent status, but old ties were still strong, especially in the fledgling Canadian navy and when a British Admiral requested help because of the “grave danger of a general (uprising) of communists at San Salvador (the capital of El Salvador) involving imminent danger to British lives and property” he requested the two RCN ships “be directed to render such assistance to British subjects at Acajutla as may be necessary.”

The invasion of El Salvador

In the morning of January 23  the RCN destroyers Skeena and Vancouver  dropped anchor in the harbour, each with an armed landing party at the ready.  A senior officer was sent ashore and was assured by the local British Vice Consul and port commander that there was no actual threat at the port, although there had been a bloody attack on a Customs house at a town 15 miles away.

A much different message came from the Consul in the capital about 100km away who insisted  an armed force should be landed. The Skeena Captain and force commander V.G Brodeur declined but sent HMCS Vancouver to the southern port of La Union to show the flag there and calm local concerns.

The panicked British Consul then insisted the Canadians come to the capital to see the situation for themselves.  Thus, the Commander and his exec carrying pistols and a gunners mate with a Lewis gun  concealed in a canvas hammock boarded a car equipped with wheels to travel the rails, and headed for the capital.

As that group was travelling, the Consul then called the port again demanding that Skeena send her landing party ashore and to head to the capital, and that Vancouver also send her armed men ashore.

All was calm at Port La Union and Vancouver’s platoon remained on board waiting to hear from the Canadian commander, while Skeena agreed to put the armed platoon ashore but would not proceed to the capital.

Thus began Canada’s invasion of El Salvador.  Some 41sailors armed with rifles, bayonets, Lewis guns and ammunition landed on the wharf at Acajutla and headed toward the beach. Before they reached the end of the jetty, a Salvadoran officer held up his hand indicating they should go back.

Thus the tough group of armed sailors  stopped, looked at each other and turned around. Strangely, another message from the British Consul arrived saying landings should not take place. So the party got back in their boats and headed to the ship.

Arriving back on Skeena, yet another message from the Consul arrived saying they should land “immediately”.

This time the “invasion force” made it to the beach in spite of the port official. but were told by the local Vice-Consul they couldn’t go further as they had no permission from the government.

The officer of the landing party was rightly angry at the confusion and an animated discussion ensued among them about whether they could or should go to the capital or whether armed foreign troops should even be on Salvadoran soil.

Eventually a compromise allowed the Canadians to fortify their position on the beach at the end of the jetty, but  go no further.

Meanwhile the Canadian Commander met with the junta leader and was assured the rebellion was almost broken (1*), that guards would be placed around British interests and there was no need -or permission- for foreign troops on his land.

Captain Brodeur then ordered everyone back on board and headed back himself. He also sent word to Vancouver to rejoin Skeena.  Just in case of trouble however, the Canadian ships stayed in the area even after American ships arrived on the 27th.

Eventually a compromise allowed the Canadians to fortify their position at the end of the jetty, but  go no further.

Meanwhile the Canadian Commander met with the junta leader and was assured the rebellion was almost broken (1*), that guards would be placed around British interests and there was no need for foreign troops on his land.

The Commander then ordered everyone back on board and headed back himself and ordered Vancouver to rejoin Skeena.  Just in case however, the Canadian ships stayed in the area even after American ships arrived on the 27th.

On the 31st, the Canadian ships sailed for the Panama Canal, but before they could enter, the Canadian government cancelled their participation in the Caribbean exercise and ordered them back to their base in Esquimalt, BC

Although not quite akin to “gunboat diplomacy”,  and although somewhat comical, there was potential for very real danger in what was the first time that the Canadian Navy had landed an armed force on foreign soil. A poten

thanks to the restraint of the Canadian Commander V G Brodeur, a potential international political, diplomatic and military

The British thanked the Canadians for responding to their request and possibly having contributed to the fact that British possessions and citizens were unharmed.