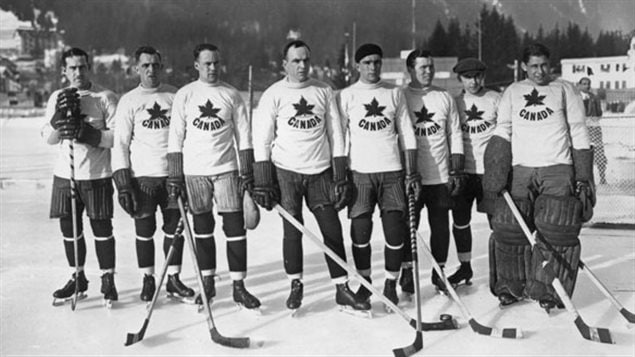 In 1920 at the summer Olympic games in Belgium it was decided there was enough interest in winter sports to organize a trial winter event.

The location would be Chamonix, France, the picturesque resort town at the foot of Mont Blanc.

Originally it was called the “International Winter Sports Week”

The original sports were:

Canada sent a male (Melville Rogers-Ottawa)  and female (Cecil Elaine Smith-Toronto) figure skater to compete in singles and as a doubles team, and Charles Gorman of Saint John New Brunswick to compete in speed skating.

The hockey round robin didn’t begin until later in the week, but the Canadians proved to be the team to beat. In the first match they clobbered Switzerland 33-0, and it went like that against Czechoslovakia and Sweden ending with 85 goals to none against in their three games.

Mont Blanc may have been in the background but the Granites proved to be another stone that couldn’t be moved. In the final events, at least Great Britain scored 2 goals but lost 19-2. Then it was the Americans who have ever since been Canada’s chief rival. But when the final match in the series was over the score was 6-1 for the Canadians.

The Granites took gold with a goal-scoring record of 110-3.  In an interesting side note, The Canadian anthem played was not “O Canada” but rather “the Maple Leaf Forever”, both of which were still vying for popularity at the time.

In 1925, the IOC decided that the International Winter Sports Week had been such as success that they retroactively declared it to be the first official Winter Olympics which would thereafter be held every four years like the Summer Olympics.

But not the first Olympic hockey gold!

However, it wasn’t the first Olympic hockey gold for Canada!

That happened in 1920 when figure skating and hockey were introduced and held at the Summer Olympics. At that time the Winnipeg Falcons team took the gold, meaning Canada is the only nation that holds official Winter and Summer hockey gold.