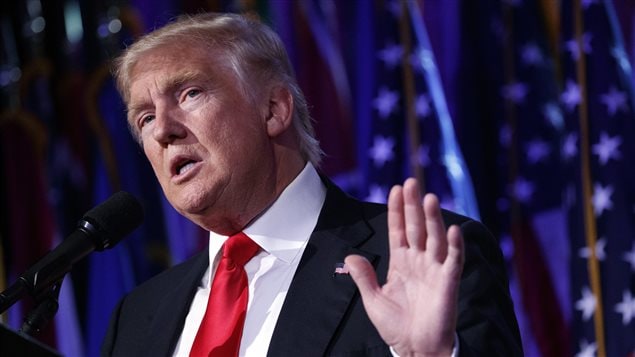 U.S. President Donald Trump promised to move the U.S. embassy in Israel from Tel Aviv to Jerusalem. But will he go through with it?
Photo Credit: Evan Vucci/AP file photo/Nov. 9, 2016

If the U.S. were to act on President Donald Trump’s vow to move its embassy in Israel to Jerusalem there would be likely be rioting and increased terrorism, says Canada’s former ambassador to Israel, Jordan and Egypt. Michael Bell says the move would be a “disastrous error.”

Trump advisors ‘don’t know very much about the Middle East’

Bell has had conversations with former advisors to U.S. administrations and found they are “deeply skeptical of the wisdom” of Trump’s advisors on the Middle East.

Bell notes that Canada considered moving its embassy from Tel Aviv to Jerusalem in 1979. There was swift reaction from the Arab world. After a six-week tour by a highly-placed emissary, Canada’s prime minister backed down. Bell says it would be best if the United States did the same and backed down now from the promised move or, at least, stalled.

Jerusalem is home to the Sacred Esplanade which has very deep religious and emotional significance for all Muslims and for Jews too. East Jerusalem is also where Palestinians want their capital to be if the dream of having their own state were ever to materialize.

Bell says Israeli security officials have already warned that moving the U.S. embassy to Jerusalem would set off riots and other violence.  Bell agrees. “I think that in the West Bank itself and East Jerusalem you’d have tremendous rioting and probably a rise in terrorism.” He notes that Arab countries might want to temper their reactions to stay on the good side of the new Trump administration, but nonetheless they would have to take the position of being deeply opposed. Reaction on the street would not be restrained.

A spread of terrorism predicted

“The Arab street, the Muslim street, so to speak, will behave in a very volatile manner,” says Bell. “They’ll be rioting. There’ll be probably assassination attempts. There’ll be a spread of terrorism.

Even if the U.S. does not go ahead and move its embassy, Trump’s pro-Israel stand has emboldened Israel to announce that it will expand settlements in the West Bank. The United Nations has called Israeli settlements in occupied Palestinian territories a flagrant violation of international law. Former U.S. President Barack Obama pressured Israel to slow down the building of settlements. But days after the swearing in of Trump, Israeli Prime Minister Benjamin Netanyahu Israel approved a plan to build 2,500 more homes in the West Bank.

Bell says Canada is unlikely to align its policy on the Middle East with that of the U.S. He says Canada does not want to jeopardize its chances of getting a non-permanent seat on the UN Security Council. Also, Canada’s prime minister is eager to play a bigger role in international affairs and it cannot do so if it is seen to be taking sides.