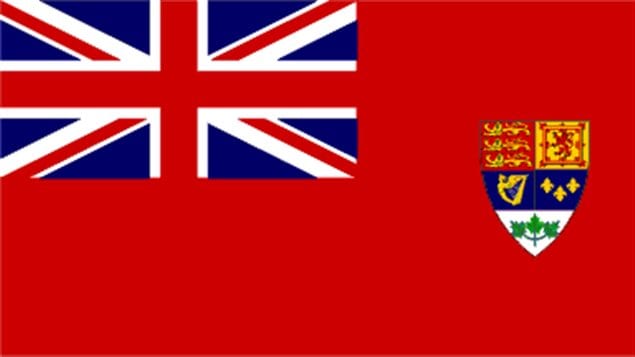 The 1922 approved version of the Red Ensign with the official 1921 Coat of Arms of Canada in the fly
Photo Credit: Clay Moss

Canada has an interesting history with its national flags.

Canada came into being in 1867 and usually when a country is formed, one of the first things it does is create a flag as part of its new and distinct identity. That didn’t exactly happen in the Dominion of Canada.

In fact, for decades thereafter Canada continued to regularly use the British Royal Union flag. (commonly known as the Union Jack).

The fur trading companies in Canada had been using the Red Ensign of the British Merchant Marine for almost 100 years previously flying from their far flung forts simply adding the company letters in the fly, ie HBC for Hudson’s Bay Co.. They would also however fly the Royal Union flag.

Within a few years (1871) and to establish a bit of identity, a variation of the British Ensign was commissioned by the national government. It included the arms of the four founding provinces/colonies of Ontario, Quebec, Nova Scotia and New Brunswick within a shield placed in the fly.

This became the unofficial flag of Canada and as other provinces joined confederation, their symbols were added to the shield.

This became a little confusing and hard to distinguish at any distance as other colonies were also using variations of the Ensign. This became further confused as various flag manufacturers would add their own embellishments, sometimes a crown above the shield, sometimes surrounding the shield with a laurel wreath and so on.

Canada’s official Coat of Arms had been created in 1921 and not satisfied with the confusion of then nine provincial symbols crowded in the shield, the government through “order-in-council” in April 1922 ordered flags to be changed, replacing the previous cluttered shield to instead show this new more simplified image.

The Canadian Coat of Arms represented the four founding peoples: the lions of England, the Royal Scottish Lion, the harp of Ireland, and the Lys of France. (symbols also used on the city of Montreal’s official flag for the same reason).

Below them was a spring of green maple leaves. Although fairly often seen, it was still technically unofficial.

However it was on this date January 26, 1924 – another order-in-council was issued, this was to approve the new version of the Red Ensign for use on government buildings abroad to represent and distinguish them as Canadian.   Thus it mandated this flag to be an official distinction and representative for Canada in the wider world.

(In 1945, the Red Ensign was allowed to be flown on government buildings in Canada, including Parliament.)

It should be noted that in the latter part of the Second World War, Canadian military units were to use the Ensign when serving alongside other nations.

And yet, it was still not Canada’s official “national” flag, which in theory though perhaps less in practice, continued thereafter to be the Royal Union flag until 1965.

In 1957, this official Ensign, but still only semi-national flag, was slightly modified, notably with a simplified Irish harp with the feminine features gone, and the leaves were changed from green to red.

This, sort of, Canadian national flag remained in use until Canada did get its actual official national flag, the Maple Leaf (after years of heated debate) in 1965.

It should be noted that the flags of the provinces of Ontario and Manitoba chose at the same time to adopt the Red Ensign with their respective provincial symbols in the fly as their official provincial flags.

Canada’s simple red and white maple leaf is now one of the most easily recognized national flags in the world following closely behind the Royal Union flag, and the US Stars and Stripes.