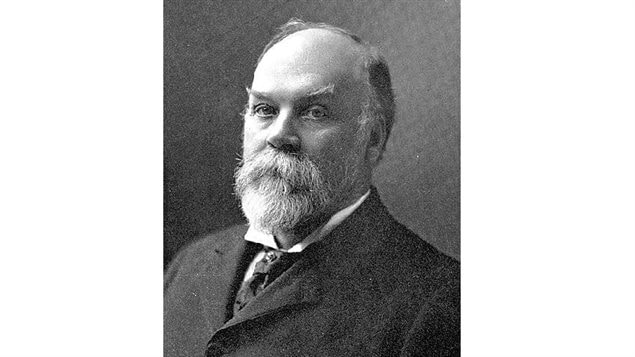 Portrait of Timothy Eaton circa Dec 1902. He became arguably the single most known name in Canada for several decades, and changed retailing in Canada.
Photo Credit: City of Montreal Archives-wiki commons

There was a time when the name Timothy Eaton or that of his store, Eaton’s, was probably the single most recognized name in Canada.

Sure most adults would know the name of the Prime Minister of the day, and later, movie stars would be widely known, but everyone in Canada from children on up would know about Eaton’s and its founder.

But by that time the retail empire he had created has already reached into most homes across the country, and would continue to grow after his passing.

Timothy Eaton had introduced some then still revolutionary ideas in retail: one price, no haggling, prices indicated on the items, cash, no credit, and a something almost unheard of anywhere, a guarantee on products sold, which later became the store slogan, “goods satisfactory or money refunded”.

He initially operated  a bakery with his brothers in a small southwestern Ontario town.  When that didn’t work out so well, he opened a dry goods store. That went better and he sold that and moved to Toronto where he bought an existing dry goods store on Yonge Street in 1869.

It was there he introduced his revolutionary ideas. Other merchants thought the ideas of no credit cash sales, fixed prices and guarantee would mean he would soon fail.

In 1884, the T. Eaton Co introduced another new idea, a mail order catalogue.  This would allow Canadians in hundreds of small towns and semi remote rural areas access to any of the goods available to those in the big city.

The arrival of the Eaton’s catalogue in homes across the country was always a big event.

Eventualy the catalogues would expand to offer just about anything imaginable, from farm inplements, to kitchen utensils, fishing gear, boats, toys, clothes, appliances, furniture and until 1931, even barns and houses from kits and in much later decades even long slender plastic “facial vibrators for women” 2 for $5.50 two batteries included. Yes you could order just about anything imaginable.  And another huge advantage, free delivery.

As the enterprise grew, Eaton’s also created its own manufacturing setup.

But times change. Suburban stores and malls began to take business away from “Eaton’s” various downtown locations and some poor management decisions on how to position itself in the market didn’t help nor did an economic downturn in the 1980’s.

In 1999 the chain filed for bankruptcy and was picked up by Sears. Eventually Sears retired the brand in 2002 and although Eaton’s major Toronto outlet had been renamed Sears, that closed inl 2013.  The location is now occupied by an American retailer, Nordstrom, although still popularly known as the Eaton Centre, it is not clear if that name will endure as time passes and the memory of the legendary retailer