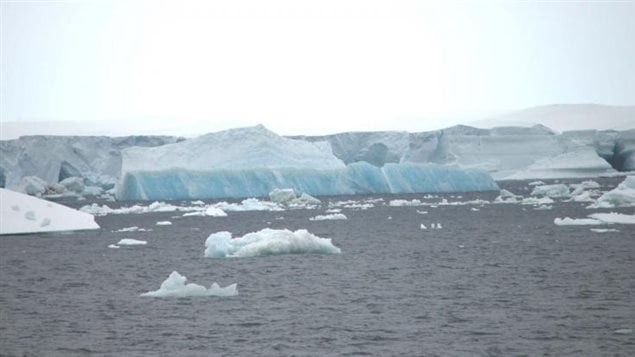 Ice Trek 2006: Icebergs breaking off from a large ice sheet in the Antarctic summer. Overall ice loss from both poles has reached a record this year, for the lowest global sea ice extent ever recorded
Photo Credit: Ted Scambos and Rob Bauer, NSIDC IceTrek

Normally in the winter in the Arctic, the sea begins to freeze and sea ice extent grows.  That didn’t happen quite that way this year.

Meanwhile in the Antarctic, the ice extent is also less than the typical average.

The result is that the global sea ice level is the lowest it’s ever been on record.

Not only did sea ice in the Arctic not form as usual, this winter the temperature registered at the North Pole was on average about 10 degrees Celsius warmer than average in November and December.

Professor Colgan points out that on the winter solstice in December, a monitoring ocean bouy about  140km from the North Pole recorded a temperature just above freezing, or about 22 degrees C above average.

Colgan says that while the polar regions have been losing sea ice gradually, this year represents a big change in that loss.

He adds it now seems likely that by 2050 there could be an entirely ice free Arctic in the summer, something that hasn’t occurred in 125,000 years.

He also says there are indications that the massive loss of glacier ice from Greenland may be affecting a major ocean current which brings warm equatorial waters to the north.  He says while Greenland ice loss is much less in the winter, the yearly average is an astounding 8,500 tonnes….per second.

He adds there has been a very strong concern about the significance of ice loss this year among cryospheric scientists adding, “It raises some concerns about tipping points and non-linear feedbacks”.