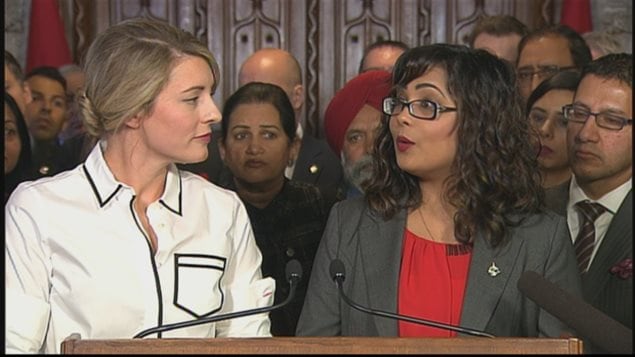 Heritage Minister Mélanie Joly(left) and Liberal MP Iqra Khalid were among those at a news conference Wednesday on Parliament Hill in Ottawa ahead of the debate on M-103, which calls on the government to condemn Islamophobia.
Photo Credit: CBC

A Liberal government motion to condemn Islamophobia is set to begin in a few hours.

It’s expected to be a heated debate.

Liberal Member of Parliament Iqra Khalid who is originally from Pakistan, and now represents a Mississauga riding (near Toronto) proposed the motion.

Today in a press scrum in the halls of Parliament, Heritage Minister Melanie Joly, says the Liberal government is throwing strong support behind the motion, telling reporters, “”There is no place for hatred and no tolerance of abuse”.

As a “motion” it is not a bill or law, and has little binding effect.
Still there is strong criticism saying it singles out Islam for special consideration and protection while also having the potential to limit free speech.

While the motion will be supported by the majority Liberal party, and members of the New Democratic Party, most Conservatives will vote against it.

Maxime Bernier, a Conservative leadership candidate  said he’ll vote against it unless the word “Islamophobia” is removed.

In a Facebook post he wrote,”  “Is this motion a first step towards restricting our right to criticize Islam? Given the international situation, and the fact that jihadi terrorism is today the most important threat to our security, I think this is a serious concern we have to take into account,” he wrote. “Free speech is a fundamental Canadian value. We should reaffirm everyone’s right to believe in and criticize whatever belief they want, whether it is Islam, Christianity, Judaism, Hinduism, atheism, or any other”.

Debate on the motion is set to begin late this afternoon.