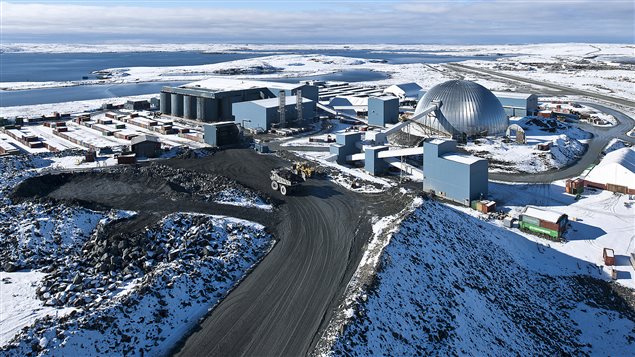 Toronto-based Agnico Eagle Mines Ltd. is moving ahead with plans to expand an existing gold mine project and develop another one in Canada’s Arctic territory of Nunavut, the company announced Wednesday as it released its 2016 financial results.

The company said its board of directors approved plans to invest $330 million to expand its Meadowbank mine, about 100 kilomtres northwest of the community of Baker Lake, and $900 million to develop its new Meliadine project near Rankin Inlet, on the northwestern shore of Hudson Bay.

“What we see in Nunavut is another strong platform developing for Agnico Eagle. We see it as a great place to do business and we see it as a region that has tremendous mineral potential,” Sean Boyd, the company’s CEO, said in a statement. “We believe that between the Meliadine project and the Amaruq satellite deposit at Meadowbank, the company has a significant mining platform that has the potential to produce gold for several decades.”

The Meliadine and Amaruq mines are expected to become operational in 2019, the company said.

Agnico Eagle estimates Meliadine’s mine life at 14 years, and it hopes that the Amaruq extension will add another six years to the Meadowbank project, during which time it expects to produce at least 5.3 million ounces of gold.

The company estimates it will spend about $500 million a year to acquire goods and services needed to run the projects, said Agnico Eagle spokesperson Dale Coffin.

“A lot of our suppliers will be coming from that region of Nunavut as well, so they’ll benefit from having two mines now in that region,” Coffin said.

The two projects are expected to generate more than 900 new jobs in addition to the 1,000 jobs already in place at the Meadowbank, Coffin said.

The company plans to employ over 700 Inuit workers from the seven Inuit communities of the surrounding Kivalliq region.

“We’ve already started with our Inuit workers in the region job training, a labour pool of trained workers who will automatically qualify for jobs,” Coffin said.

Since 2015, the gold mining company has had in place what’s called an Impact Benefits Agreement for the Meliadine mine with the Kivalliq Inuit Association. The company is in the process of updating its impact benefits agreement for the Meadowbank mine to include the expansion of the Amaruq satellite deposit.

“One of the criteria in the impacts benefit agreement is all the entry-level positions are Inuit-designated jobs,” Coffin said. “And we already have success in training our existing workforce through apprenticeship programs so they’re moving into the trades, and we’re getting more and more people interested in shifting their work from the production area into the trades.”

The company already possesses all permits and licences required to start work the Meliadine mine, Coffin said.

Agnico Eagle is in the process of going through the Nunavut Impact Review Board, the territorial regulator, for all the permits and licences for the Amaruq satellite project, he said. The company expects to complete the process in 2018.

The mining company has to comply with strict environmental regulatory and monitoring measures to mitigate the environmental impact of the two projects, Coffin said.

There is ongoing monitoring for fish and water, and the company has implemented strict control measures for the summer caribou migration period, he said.

“Operations come to a stop when the caribou are moving through,” Coffin said. “There is no movement of vehicles or anything on the land, only in emergency cases.”