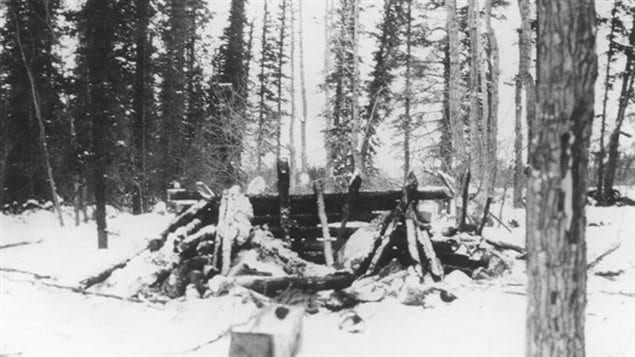 The remains of *Johnson’s* cabin with only one wall standing after the RCMP dynamited it. When they approached to pick up his body, he leapt up from a trench he had dug in the floor and fired at them. After a day long shooting standoff, the Mounties retreated and Johnson took off into the wilderness
Photo Credit: wikimedia

Canada history: Feb 17, 1932: The end and beginning of the mystery of the Mad Trapper

It is one of the many enduring legends and mysteries of Canada’s far northern frontiers.

Who was this man? They didn’t know then, and they still don’t know now, and probably never will.

The story begins in summer of 1931 when a stranger about age 35, shows up in the tiny community of Fort McPherson in Northwest territores.  Any stranger arriving attracts a little attention and the local RCMP chatted with him, but found him to be less than forthcoming about who he was, why he had come to this remote region, and what his intentions were.

He was soon viewed as a rather unfriendly loner.  This itself was unusual in a place where because of the isolation, dangers, and hardships of life in the wilderness, friendliness  and helpfulness was the norm.

The name Albert Johnson was given, but there was no indication that was true.

He seemed to have enough money paying cash for supplies and he then moved on to the Rat River where he built a small cabin, but without having obtained a trapping licence which was also deemed very odd for someone moving into the bush.

In December, the local Mounties in in the hamlet of Aklavik heard complaints of someone taking animals from native traplines, and went to investigate the stranger who called himself Albert Johnson.

This in itself was no small effort for the Royal Canadian Mounted Police officers.

In temperatures around -40, two constables used dog sleds to travel the almost 100km to Johnson’s cabin, but when they got there he refused to answer the door or even talk to them at all.   After about an hour trying to get him to respond, they were frustrated and freezing. They left,but with the intention of returning with a search warrant, accompanied by two more Mounties and a civilian.

After the long trek back to base, the repeated the journey in the bitter cold of the frigid Arctic territories a couple of days later.

This time, when he refused to talk, they tried to force the door

Johnson’s response was a bullet fired through the door severely wounding one of the police officers. They retreated after a few shots, taking the wounded man in desperate rush to get the officer back to medical attention in Aklavik. It was extremely fortunate fo the officer that the bullet had entered and exited his upper chest without hitting major organs, and he soon recovered.

Now the episode had become serious

From a simple case of making inquiries about tampering with traplines, it had now escalated into an armed assault and attempted murder of a police officer. The Mounties now returned in force with nine men, and several kilos of dynamite to blast Johnson out.  But Johnson had apparently always anticipated problems and his cabin was reinforced, and he had gunports through the walls.

They tried to coax him out, but gunfire was his response. A shooting battle ensued but with no injuries and no resolution, the Mounties decided it was time to end this situation.
After carefully thawing out their frozen dynamite, they began tossing it at the cabin with little effect. Finally with several sticks tied together they tossed the explosive into a damaged section and bles the cabin apart.

Thinking they’d find Johnson in little pieces, they approached but were shocked by gunfire coming from within the cabin.

Johnson had dug himself a bunker into the floor, apparently for just such an occasion and had miraculously survived the huge blast.

A 15 hour shootout ensued in the temperatures which hovered around -40C. Now lacking food, water and ammunition, and slowly freezing in the bitter weather, the posse retreated to Aklavik for reinforcements and to re-arm.

Word of the high Arctic shootout began reaching the world by radio.

When the police returned on January 14th, they found Johnson had taken off and so began one of the world’s most epic pursuits through the wilderness in some of the harshest conditions in the world.

Johnson tramped on foot for dozens of miles in deep snow for about two weeks surviving the dangers and the windy, bitter cold. He couldn’t hunt with his rifle as the noise would give him away, leading one to wonder how he survived. Although amazingly wily, the dog teams and trackers caught up with him on January 30th.

Another gun battle ensued during which Johnson killed one of the Mounties, Cst. Millen.

As the story dragged on it now became an international thriller intriguing radio audiences everywhere as they followed the manhunt for the man now being called “theMad trapper of Rat River”.

After the shootout, Johnson was on the move toward the Yukon, and making a superhuman effort through the woods, sometimes wearing his snowshoes backwards to fool the trackers, sometimes doubling back on his trail.

Everyone in the north was now on the lookout for him. Johnson still of course couldn’t use his gun or even light fires to dry his clothes as either would give him away.

He continued to forge dozens of kilometrers a day through heavy snow, blizzards and an unbelievable cold.

Knowing the Mounties would block the only two passes over the Richardson mountains, Johnson once again did the impossible.

He had to get over the mountains and while the mounties took cover and waiting in another raging blizzard, Johnson somehow managed to scale a a steep 2,100 metre ice covered mountainside.

Experts said the feat would be extremely difficult in good weather and only if one had proper climbing gear. How Johnson managed is just one more aspect to his mystery and the legend.

The Mounties were now flummoxed as they had lost his trail in the blizzard and as he had not attempted to cross either of the two passes.

A plane was called in, which by chance spotted his trail on the other side of the mountains. The following posse was informed by radio and headed up the Eagle River where they finally surprised him out in the open on February 17, 1932.

Another shootout occurred with Johnson. Caught on the frozen river with no cover, he was an easy target, and was hit.

He continued shooting back. He was hit again, and again, in fact eight times but still fought back wounding an officer. Finally a ninth shot  shot proved fatal.

On his body was found some $2,000 in cash, but no identification.

The epic chase across the Arctic had intrigued world radio listeners who had been following the news day after day, week after week.

In the almost 6 week chase they realized that in deep snow, through blizzards and -40 degree weather, Johnson had been chase for at least 240 km but he had probably actually travelled much more due to his doubling back several times to throw off his persuers.

In one more of his incredible feats, he had travelle some 137km in three days in a blizzard, seemingly without food, while also managing to climbing an impossible mountain.

During the chase he had travelled on foot twice as fast as his pursuers with their dog teams and sled.  He often doubled back and circled around to throw them off his trail, and travelled right through a couple of whiteout blizzards that completely stopped the trackers.

In spite of two autopsies, the last in 2007, his identity, or even his real name has never been determined.  Several people over the years had claimed a possible connection, but the DNA tests showed no relation.  The only clue came from isotopes in his teeth which showed he probably grew up in the US Midwest “cornbelt”.

As such, the mystery remains to this day of who he was, why he came to the remote far north, and why he acted as he did.

The legend has been subject of books, songs, and documentaries. A 1981 Hollywood version “Death Hunt” featuring Lee Marvin, and Charles Bronson, re-invents and in typical Hollywood fashion, is only very loosely based on actual events.

A British TV version was made in 1972 called “the Mad Trapper”, and another called “Challenge to be free” in 1975, as well as documentaries and a number of books on this legendary wilderness chase and unsolvable mystery of who he was, what he was hiding or running from, and why he acted the way he did.