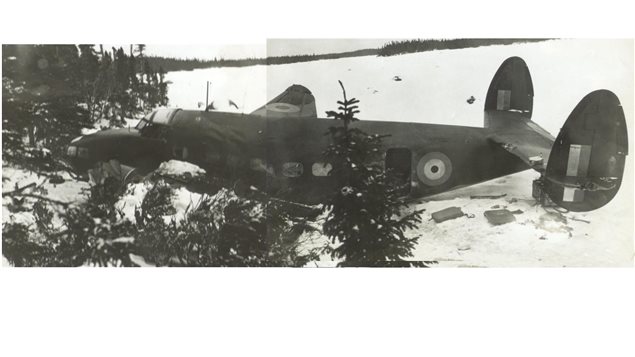 Composite of two photos of the crashed plane in 1941 sometime after rescue and recovery of the pilot and the bodies.
Photo Credit: KF Chapman-Howard Banting- University of Toronto

The name of Dr Frederick Banting of Toronto is legendary in medical circles and to untold numbers of people owe their lives to his discovery of insulin.

He announced the discovery in February 1922, and the world proclaimed it as the world’s first “miracle” drug (hormone) and treatment for diabetes.

Knighted in 1934, for his discovery Sir Frederick Banting continued research into silicosis and cancer and was later appointed chairman of the National Research Council’s Committee on Aviation Medical Research in 1939.

When the Second World War broke out, he wanted to do his part in uniform as he had done in the First World War where he had been awarded the Military Cross.

Although allowed to enlist and given the rank of Major, he was in his late 40’s on the one hand and on the other his work in medicine made him far too valuable for any duty in a fighting theatre.  Instead he became a liaison between military medical services in Britain and Canada and to would head to England to discuss his research into aviator health in relation to military pilots and the war effort.

He arrived in secret on February 17th, 1941 at the bustling military airbase at Gander Newfoundland where very special arrangements had been made to get him aboard a plane to England.

On February 20th,  1941 he joined a pilot, navigator and radio operator aboard a twin-engine Lockheed Hudson bomber being ferried to Britain.

Shortly after takeoff in the late evening and heading out over the ocean on the first leg of the trip, one of the engines cut out. The pilot, Capt Mackey turned and began heading back to the airport at Gander, but possibly the other engine also began sputtering or cut out completely  or simply couldn’t hold the plane in the air. Mackey told the crew to put on their parachutes and jump, but in the blackness of the night and possibly not knowing where they were or what they would land on, they all stayed.

Folks in the hamlet of Musgrave Harbour heard the plane in difficulty as it flew rather low overhead in the darkness of the snowy night but were not sure what happened to it as it flew into the distance out of sight and hearing.

The doomed aircraft crashed only a few moments later though in the night in a remote part of the island about 16 kilometres from the town separated by rough brush and forest,

The navigator and radio operator were killed in the crash, and Banting seriously injured with a severe blow to the head and internal injuries.  The pilot survived and left to get help but gave up faced the weather and wilderness. Returning to the plane he waited for search planes to find them..

The crash site of Hudson T-9449 was spotted on the 24th, but it was too late. Banting had died during the day after the crash, February 21, 1941, of his injuries and exposure.

The news of the tragic death of the famous doctor, Nobel prize winner, and the man who had saved the lives of so many, came as a shock to the world.

A small memorial park has been set up in Musgrave Harbour where the few remnants of original wreckage lie, while a restored Hudson has been placed nearby.