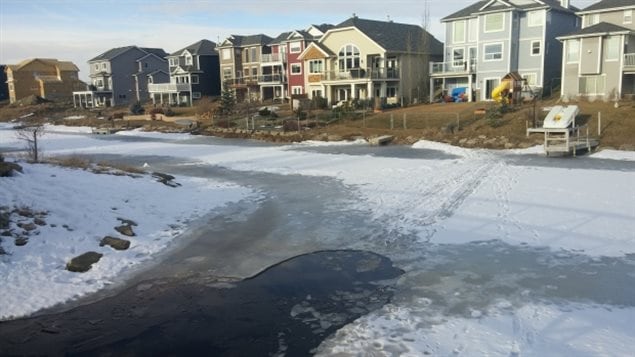 The ice near homes in Airdrie, Alberta proved to be fatally thin and unstable.
Photo Credit: Justin Pennell/CBC

Two young boys fell through the ice on a canal near their home on Monday in the western town of Airdrie, Alberta. The six-year-old boy died after being airlifted to hospital. His 10-year-old brother was taken to hospital by ground ambulance and is in stable condition.

At around 1:25pm a neighbour happened to see the boys fall through the ice and called emergency services. First responders including police and firefighters rushed to the scene and pulled the boys from the water. They were not sure how long the boys had been there.

Accidents like this happen in winter in Canada when people misjudge the thickness of the ice and whether it can support them or the weight of their vehicles.

This case occurred on a canal where ice is less stable than on a lake where the water is still. And it is a time of year when there are freeze and thaw cycles which destabilize the ice.

Police Cpl. Curtis Peters issued a request for people to “please stay off of the ice.”