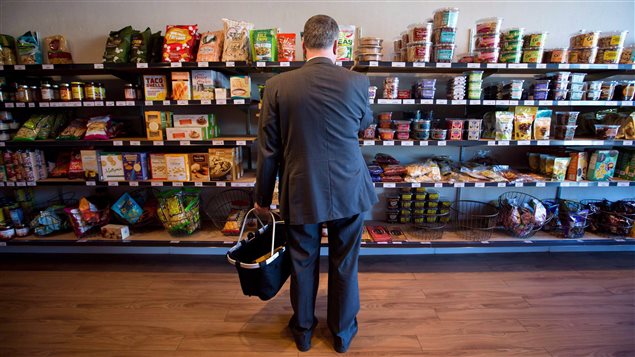 Forty per cent of Canadians polled said that they had purchased a food item that was labelled fraudulently.
Photo Credit: PC / DARRYL DYCK

63 per cent of Canadians are concerned about food fraud: study

Almost two-thirds of Canadians are worried that the food they buy in grocery stores or markets is either counterfeited, adulterated or misrepresented, according to a new study by researchers at Dalhousie University in Nova Scotia.

In an online survey conducted by a team of researchers led by Sylvain Charlebois, Dean of the Faculty of Management at Dalhousie University, 63 per cent of respondents said they were concerned about the widespread practice known as food fraud.

And forty per cent of respondents reported purchasing a food item that was labelled fraudulently.

“Canadians are becoming more and more aware of food fraud and we are seeing that they have greater concerns with the food they are eating,” Charlebois said in a statement.

The fraudulent misrepresentation of food is a public health hazard, especially when it comes to allergies and food intolerances, Charlebois said.

Approximately 2.5 million Canadians report having at least one food allergy, according to Food Allergy Canada.

More than 40 per cent of Canadians read food labels looking for allergen information, says the NGO.

Consumers identified seafood and fish as the most likely source of food fraud, followed by oils and wines.

What’s in your olive oil?

Larry Olmsted, author of “Real Food Fake Food,” told the Canadian Press olive oil is the perfect example of a product that frequently contains unlisted ingredients. Unscrupulous merchants or suppliers are known to water it down with cheaper peanut or soy oil, both of which are allergens.

The Canadian Food Inspection Agency receives an average of 40 complaints annually from consumers about potential food misrepresentation, spokeswoman Lisa Murphy told The Canadian Press, and it investigates each case.

The Dalhousie University survey was conducted in English and French for three weeks in January among nearly 1,100 adult respondents living in Canada for at least one year.